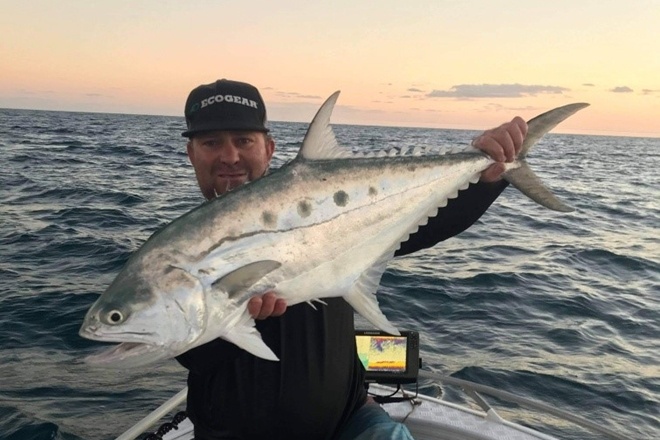 Jordan Stoddart with a Queenfish he caught offshore from Bundaberg.

For the anglers that got out in the good weather window that we had, there was some nice fish caught such as coral trout, red emperor, tusk fish and red throat emperor. Anglers have been using a range of baits but the mullet fillet has been the stand out for most anglers. They have also been using a wide range of lures and slow fall jigs to get the job done.  The Samaki Ribcage Slow Fall Jig and the Zerek prawn rigged on a Mustad 7/0 21 to 24 gram is doing the damage. When using a vertical jig off the bottom, the key is to keep the lure as close to the bottom as possible.  When planning a trip offshore, remember to always check the weather report before heading out.

There has been a heap of different species caught over the last week, such as queen fish, school and spanish mackerel, tuna, trevally, snapper and grassy sweet lip.  When catching fish in our local area,  the key has been finding the bait fish and the rubbly bottom and using a range of different methods from baits and lures. One of my favourites is using a 5 inch Jerk Shad.  Fish close to the bottom or even cast into the school of bait fish and waiting for the bite or retrieving it back to the boat quickly after letting it sink to the bottom.

With the recent weather patterns, the river has been producing some nice grunter, cod and the odd bream. With the colder weather coming, the bream and flathead will be chewing their heads off.  Soon, the best place to find the bream will be along your local rock walls and the sand flats on the last hour both side of the tides. The baits to use are mullet strips, yabbies, and sand worms.   There has been some good prawns being caught in the river with anglers getting their 10 litres in a few casts.  The mud crabs have been moving around with reports of some nice crabs being caught.

With the cooler weather starting, there has still been some good fish caught in the shallows again. Because the water temperature is dropping, the 5 inch Hollow Belly’s and Zerek flat shad have been the choice of lure. Cast them into the shallows, around the base of trees and the timber lines with a slow wind back to the boat.  We have been finding there has been a few good bites around the tide changes, so if possible, plan your trip around the wind direction and the tide change. Also, don’t be afraid to fish into the night.  Most of the big fish have been caught in the dark or even at first light.