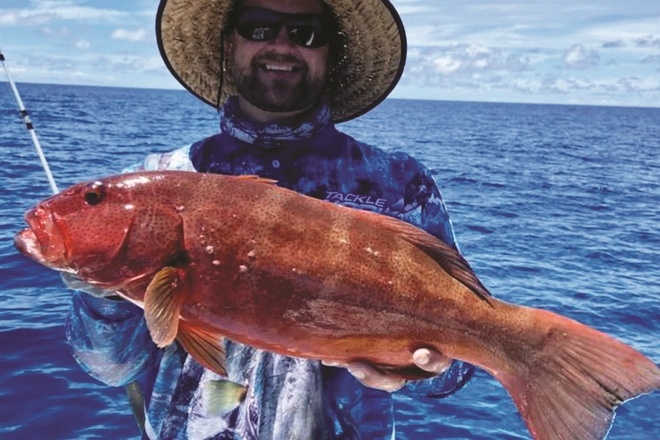 KIND weather conditions provided offshore anglers the opportunity to head out to their favourite haunts and bag a few good fish. With sharks appearing to be an ever-present threat to a good fish – particularly if it is red – those anglers fishing less popular spots have landed a greater percentage of their hooked fish whole. Bundaberg bags

Areas such as 18 Mile and Herald Patches have yielded good bags. If you do happen to get sharked, it usually signals a need to move before you experience the frustration of more taxed fish and lost gear. Don’t inadvertently set up a berley trail by throwing frames and fish scraps over the side that will attract sharks when you’re fishing.

I usually keep mine in a bucket or similar until it’s time for a big move and then discard them over the side after we have moved off the fishing spot. Chris and Brett had success fishing both 18 Mile and Herald Patches recently. Chris landed a nice red emperor using a whole mullet fillet from the 18 Mile area. Chris and Brett both enjoyed landing a few sizeable red throat and trout from Herald Patches using slimy mackerel and yakka for bait.Bundaberg bags

A recent heavy downpour, mainly along our coastal areas, has apparently livened the prawns up.  It’s not hard to tell when they start a run in the Burnett River and coming weekends should be crackers, with a spring tide or two providing plenty of water movement.

Flotillas of small tinnies with two people cast netting in turn are easy to spot.  Gatherings of tinnies can often be seen around the sugar loading terminal in the Burnett, and also occasionally upstream near Strathdees. Don’t forget to try the upper reaches of the Elliott and the Kolan rivers too, especially near the entrances to the mud drains from among the mangroves, as this is where prawns will often congregate.Bundaberg bags

Another by-product of recent rain should be more movement and easily accessible mud crabs, after being flushed from their usual habitat. While we have not had a flood to push them right to the river and creek mouths, there seems to have been enough rain to bring them into the open areas of creek  and river systems.

The Burnett River has had quite a lot of bait in it recently and catches of grunter and other predatory species have been reported. Shane from Tackle World Bundaberg has had recent success with grunter and will share a few tips if you’re keen to target them. While I am certain he won’t share his secret spot, he is generous in sharing his knowledge to help keen anglers get a start.Bundaberg bags

Spanish mackerel are usually available off our coastline at this time of year. Early morning at dawn is the best time to target these hard fighters. Make sure you have a wire trace and about 10m of heavy leader to help ensure your catch.  My favourite lures for these fish at different depths are Rapala, particularly the rattlers.Bundaberg bags

Make sure you set the alarm for an early morning run to target these speedsters. As always, I can be contacted via email at fishnboat@bigpond.com or via post a PO Box 5812, Bundaberg West Queensland 4670.