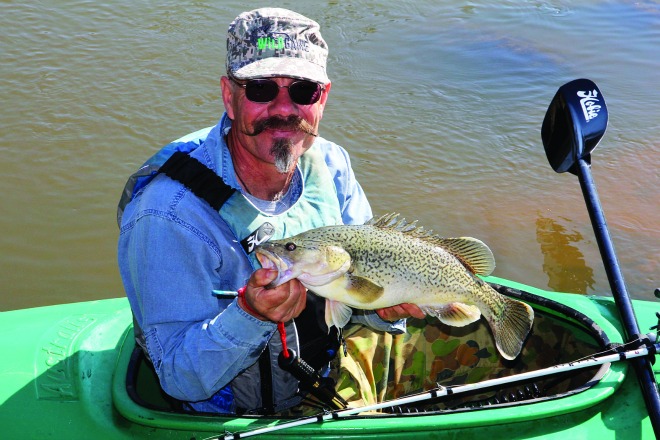 WE are now into our final month of the three-month closed season on freshwater cod streams.

Those of us who are addicted to encounters with these chunky predators of the inland waters of temperate, eastern Australia tend to suffer withdrawal symptoms from September 1 to December 1.

During those months, fishing for any of our freshwater cod species is prohibited except in some nominated stocked lakes.

I’ve previously outlined the reasons why it is critically important for anglers to abide by the strict no fishing laws of the closed season, but for readers who’ve missed them, here they are again: This closed season is in place to protect the spawning fish and, most importantly, the male fish while they are guarding nests.

For those unfamiliar with the breeding habits of freshwater cod, here’s a brief overview. As water temperatures start to climb in spring, male cod clean a hard flat surface of silt in preparation for spawning. If a female fish finds the site suitable, she deposits several hundred eggs and then leaves.

Nests are attended by the male fish from spawning right up until the juvenile cod leave the nest site to fend for themselves. It is the male’s essential job to keep the eggs free from silt, remove any dead eggs and fend off predators. Recent video evidence gathered by fisheries researchers has shown some frightening statistics. If a male fish leaves a nest unguarded for just 12 hours, that spawning will fail. It takes just that brief amount of time for shrimp, forage fish, crayfish and so on to eat all the eggs or larvae.

The same study observed that any male fish line caught and then released more than a few metres from the nest site would invariably abandon the nest. Likewise, if the male fish was kept out of the water for more than a minute, he would not return to guard the nest and its precious contents.

Totally abstaining from fishing in cod waters during the three-month closed season is therefore the only way to prevent the failure of many cod spawnings. To help while away the time while awaiting the first of December, I’ve been flicking through photographs of the last cod outing I managed in August. Midway through a road trip that took in four states, a morning was set aside for a half-day kayak session on the middle reaches of the Murrumbidgee River.

Having fished several stretches of the ‘Bidgee before, I knew what to expect as far as flow and average depth. Being aware that much of the river is relatively shallow with a moderate current helped the task of lure selection.

Most of my fishing was to be casting to the plentiful red gum snags that break the current and provide ambush spots for cod. This called for a buoyant lure that would back up out of the timber but still have enough diving ability to probe the eddies formed downstream of major snags.

When targeting cod, I like a big lure that gives the impression of a meal worth chasing. After braving air temperatures of -3C and sliding an ice-covered kayak over a blanket of frost, I was on the water at the gentlemanly hour of 8am.

In summer I’d have been on the water before dawn, but with such low water and air temperatures, it was a tactical choice to wait until the sun just cleared the riverside red gums to warm the water. Heavy rain in previous weeks had caused a minor flood that had peaked a week earlier and muddied the usually clear river.


After checking the water clarity, the tackle box was opened and a bright red Cod Lolly was clipped onto the leader. There were so many snags in the section I was exploring that fishing them all would have taken days. Paddling upstream, I dropped a light anchor over to hold position while giving the most promising-looking snags a few quick casts before moving on.

Time and again the Cod Lolly was sent arcing through the chilly air to splash down right beside a long-drowned red gum log. Every time, the lure was retrieved, bumping submerged timber frequently but returning unmolested. Only after a couple of hours and covering about 2km of river had the sun been on the water long enough for aquatic life to appear active. Baitfish could be seen moving and kingfishers were diving from their perches to secure a feed.

Reaching a section where the bankside strata changed from the familiar grey clay to steeply sloping rock, I dropped the anchor and methodically fanned casts along the shore. Placing casts roughly 2m apart, I worked my way upstream but only covered about 20m before the first fish of the morning struck. The resistance was more spirited than I expected and the reason became apparent as the fish emerged from the cloudy depths: a trout cod (maccullochella macquariensis). This was the first of the lesser-known freshwater cod to be identified as a separate species from the widespread Murray cod.

Inhabiting just a couple of strongholds in southern NSW and northern Victoria, the trout cod is totally protected. With this in mind, I removed the barbless hooks of the Cod Lolly from the fish without lifting it from the water and let it bolt back to the same spot in which it had been stationed. Hooks and leader checked for damage, casting recommenced a little farther upstream in the hope of finding the Murray cod I was actually targeting.

Just 15 minutes later and another savage strike shocked me from my thoughts and back to the task at hand. This fish, a little larger than the first, was revealed to be another trout cod, which wasn’t overly surprising because populations tend to be grouped, especially shortly prior to spawning season.

With this in mind, I turned around and headed back downriver for about a kilometre before putting the Cod Lolly back into the water in an effort to avoid any more trouties. This was easier; drifting along with the current and dropping the anchor to allow an ideal line to be worked around shaded snags.

I was almost back at the car when I took another strike from a smaller fish that was sitting on the leading edge of the root ball of a fallen she-oak. On heavy gear it didn’t take long to bring the fish to hand and discover it was yet another trout cod. This smaller fish was much easier to handle without risking its wellbeing, so a couple of quick photographs were snapped before it too went back to its home snag.

Now it appeared that either this particular piece of river was not home to any Murray cod or they were inactive and only the trout cod were biting. Not wanting to interfere with any more trout cod, I packed up the gear and dragged the kayak back up the steep bank to the car.

I drove away feeling quite privileged to have encountered one of Australia’s rarest large predatory freshwater species. Only because of intelligent, science-based fisheries regulations is this fish not only still swimming in our rivers, but making a strong, if slow comeback from the brink of extinction.

Doing it different at Glenlyon Dam 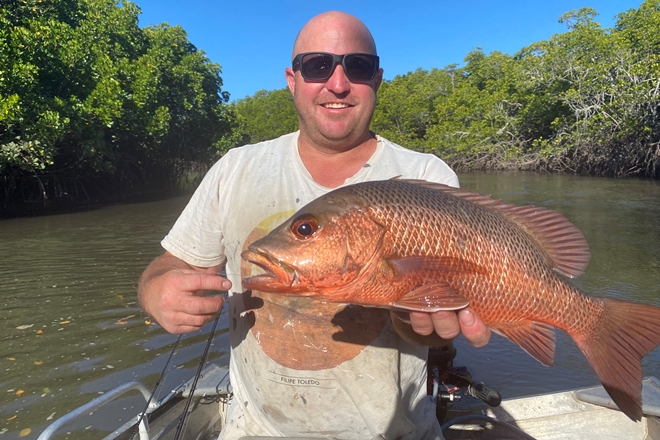 Hinchinbrook in a tinnie – part two 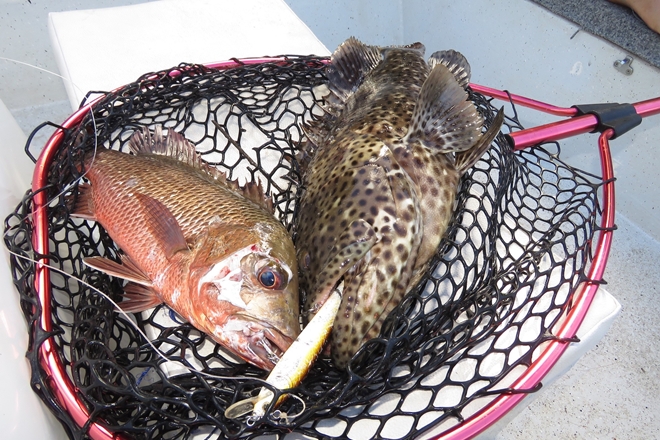