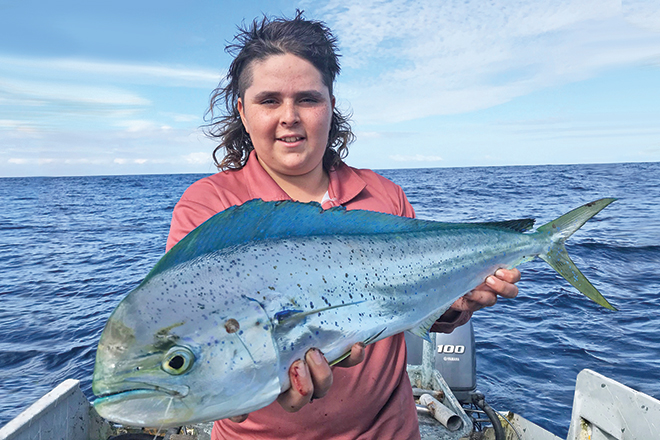 Omri with a nice mahi mahi on one of the few fishable days recently.

Inshore reefs on fire after flooding

Winter is well and truly here and the westerly wind has arrived. Inshore reefs

It’s nice to finally see what might be called a ‘normal’ weather pattern, for now at least.

I was so sick of the rain that I headed out west and guess what… it rained out there too.

At present, the north coast is experiencing a great run of snapper inshore and most people are attributing this to the flooding.

I guess if there could be a silver lining to all the rubbish weather, this would be a small consolation.

If you are visiting or new to the area, find the Brunswick local reef north of the bar, roughly off the Ocean Shores Country Club.

Inside the local reef – running all the way up to the pine trees at Wooyung Beach Holiday Park – is a stretch of reef in 12-14m of water.

This month, sound along this reef, find a spot you like the look of and, if things continue the way they have been, you should get some good snapper.

This reef will also provide jewfish, moses perch and maori cod, and was famous for cobia until they became nonexistent in the area.

Apologies for the lack of photos this month but with the weather the way it has been, I haven’t had a chance to get out.

I’ve spoken to a few professional fishers and they reckon there’s never been a year of continual wet as there has for this one.

Anyway, hopefully it’s behind us now… but only time will tell. Inshore reefs

I think the only trip I’ve done for the month was to look for dolphinfish.

Bottom fishing was out of the question that day because the current was raging, but when the current is running and the water is warm, pelagics are usually out and about.

I had Omri with me and we caught some nice fish on bait.

Omri also had a flick-stick loaded with about 8lb braid and he had a blast catching fish on lures.

He had a small popper that caught a fish after a lot of casts and the same result with a little curly tail grub.