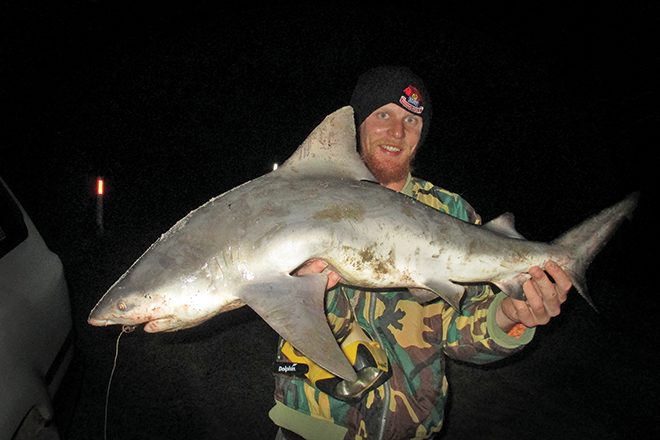 The Clarence River has been alive with sharks of all sizes this winter, which has made fishing for jew very difficult until recently.

FISHING along the Clarence Coast of northern NSW during July saw anglers reap the rewards of braving the cold chilly nights, with good catches of jewfish, tailor and bream taken from the river, beaches and headlands.

David Graham of Yamba fished the Yamba wall using live nippers for bream to 1.3kg, while George Dwyer of Brisbane chose to fish the beach along Shark Bay with pipis for bream and tarwhine to 1.25kg. Catches of flathead have slowed a bit due to the colder weather, however, captures of pan-sized fish can be taken year-round as Grafton angler E. Brooke proved by boating a good feed of fish to 1.6kg at Lawrence on fresh prawns.

Luderick finally made an appearance inside the river and Iluka anglers Tony Arnold and Wayne Franklin were just two of the many fishos on hand at the Old Ferry approach to snare fish to just over a kilogram on black weed.

Here at Iluka, Back Beach and Main Beach have been consistently producing big tailor to 4.8kg on whole garfish and bonito strips while the headlands at Woody Head, Second Bluff and the southern end of the Iluka Bluff have yielded fish of similar size on hard-bodied lures and metal slugs.

Quite a few big tailor have also been taken from the point of the Yamba and Iluka breakwalls by anglers using soft plastics meant for jewfish. Talking of jewfish, these smelly critters really came on the chew during July, with nice fish taken from the river, walls, beaches and headlands.

Inside the Clarence River, the plague numbers of sharks have begun to thin a tad, which in turn has seen jew catches increase. Ted McLean of Ashby spent a few nights fishing the Goodwood Island wharf area with his son Ben who was visiting from Melbourne, and while Ted was not lucky enough to snare a fish, Ben scored an 11kg specimen on a soft plastic.

Mitchell Cook of Casino has been fishing his secret spot well upstream for solid fish around the 14kg mark on live mullet, while my son Mischa has also been floating live mullet upstream for fish to 16kg.
Though Mischa has not lost a jew to the sharks yet, he did go close one night when a little toothy critter decided to have a gnaw on one of his fish as he was playing it (see pic).

Mischa finally got sick of putting up with the sharks in the river and decided to have a spin for jew on the southern end of the Iluka Bluff one afternoon, being rewarded with an 18.2kg fish on a hard-body lure.
Other anglers have had similar success at the Bluff during the past month, with the good news being

August will continue to see big fish taken on lures at this spot both day and night. Both the Yamba and Iluka breakwalls are producing fish to 26kg on live mullet and lures, with the T-Piece on the Yamba side being the hot spot. Here at the Iluka wall, the bulk of the fish have been taken near the old shipwreck just 100m from the carpark.

Good schools of flat-tailed mullet have been holding at both locations and will continue to do so this month. As usual at this time of year, snapper have dominated offshore catches, with just about every mark known to man producing reasonable catches of these red fish.

This month is the time to get into the luderick and bream inside the rivers before they drop their eggs and head back to sea, while those anglers wanting to chase tailor will have no problem getting a feed along the beaches and headlands.

Jewfish will still be taken inside the rivers on live mullet and lures because the flat-tailed mullet will remain around for at least another month or so. All in all, you would have to be unlucky not to get a feed of fish this month, so get out there and have a go.

Finally, my Facebook page Justjewtp got hacked and I am currently rebuilding the new version, so if you have previously liked my page, please re-like the new page.

For a bit of light-hearted jewfish fun, click here!