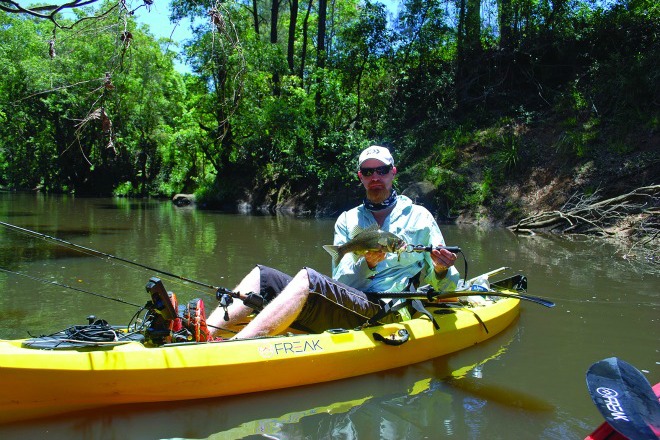 For me summer means kayak fishing in creeks and rivers.

Most watercourses can be paddled fairly easily but sometimes they can be blocked by log jams.  To make it easier to traverse such obstacles, try to limit how much gear you take with you.

Even the smaller kayaks such as a Freak Assassin GT will weigh over 25kg without your fishing gear, so as difficult as it may be, try not to take the whole tackle box along.

Rod selection really is down to personal preference but I like shorter rods to minimise the risk of breakage from low-hanging branches.

Lure selection depends on what I am targeting but the places I paddle rarely have waters deeper than a few feet, so shallow divers and light spinnerbaits are first into my tackle tray. Kayaks have very little drag and even a small fish can pull you around quite a bit.

A good habit to adopt is to park side-on to where you are casting.  When a fish strikes, it takes a lot more effort for it to pull a kayak sideways and escape into a position to bust you off. I also tend to set the drag on my reel tighter than I would when fishing from a boat.

If using a graphite rod, you need to be mindful of how much bend you are putting on the rod when trying to land a fish. You are on the waterline, therefore so much closer to the fish than in other forms of fishing.

It takes practice but once the fight is over, grab the rod near the first guide closest to the reel and hold your arm out over the opposite side of the kayak from the fish while the other hand slides a net under the fish.  This avoids overloading the rod tip with too sharp a bend.

Whether travelling up or downstream you often encounter water too shallow to paddle.

Tying a length of rope to the carry handle on the bow of your kayak and using the rope to drag it makes portage less stressful on your back, and because you aren’t lifting the bow, the damage to the keel at the stern is minimised as the friction from the rocks isn’t concentrated on a small area but spread out across the whole underside.

Now is a good time to point out that if you don’t want scratches on your kayak, stick to rivers and dams.

I have been using a Viking Espri for several years and have dragged it across rocks and paddocks for many kilometres and its underside certainly shows it. The plastic used in kayaks is very durable and I have no doubt I will get quite a few more years out of it.

When you reach the next pool of fishy-looking water, park the kayak for a couple of minutes and have a cast into some structure, whether it be fallen timber or an eddy to the side of fast water.  Most native fish will happily attack an easy feed that washes down to them.

Paddling down rapids requires just one thing: to secure your stuff!  No matter how easy a run looks, you can get caught out in a flash.

Descending rapids recently, I got caught on a rock that stopped me dead in my tracks, the kayak turned 90 degrees and the pressure of the water tilted the kayak so the cockpit filled with water and flipped me out.

It wasn’t even a challenging looking bit of flowing water. Fortunately there were no witnesses because my fishing buddy was ahead of me and saw nothing.  Questions were asked about my level of wetness, but I casually dismissed them with lies about being hot/needing a swim.

There are plenty of creeks and rivers to slip the yak into and explore, and catching a fish is a welcome reward for putting in the effort to try new places.

Don’t forget to send in your yak fishing catches to the Readers Forum. It’s as easy as emailing ben@bnbfishing.com.au and including your name and the details of your catch.

Tom lives in Brisbane and predominantly fishes from his small fleet of kayaks. He enjoys hitting rivers and creeks chasing bass and cod as well as heading offshore to catch snapper when conditions suit. In 2015 he will be spending more time getting his two young boys into camping and fishing.
Previous Barra and Bass Around Bundy
Next Berkley Fishin’ Gear – Walk N Wade