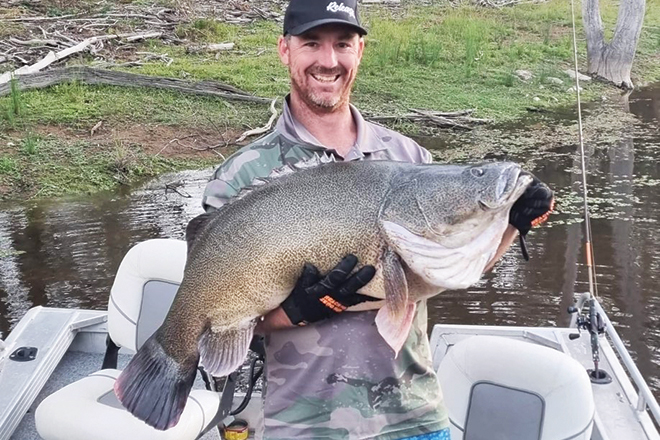 Scott Donnelly from Lismore with a 109cm Murray cod, released. Caught on a Profishent MC Fizz.

Key factors to focus on for freshwater workshops

As the saying goes, “To be forewarned is to be forearmed,” and this will be the case at this gathering of like-minded anglers and fish stockers. Freshwater workshops

There are many points to be dragged through the coals, which will also include ‘actions’ and ‘results’.

After having a letter being sent to me advising of a $73 million-dollar format being set aside for a fisheries strategy over the first eight years 2019-2027, we must understand this also covers salt and freshwater areas.

It is not enough, as this will include commercial fishing ventures as well. Freshwater workshops

We have to have an all-waters fishing licence for all recreational anglers 18 years and over, both yearly and weekly licences to be available.

We have a great chance to gain some $36 million dollars yearly across the board at a cost of 10c per day.

No doubt though, we will be fobbed off with a reply of “We will have to have a public consultation study to ask all anglers.”

Note – this review was not well advertised at the time and 14 of the 16 meetings voted overwhelmingly in support of an ‘all waters licence’ and the other two wanted funding.

Extract from the review… Freshwater workshops

To licence or not to licence

Perhaps the primary benefit from an RFL is to strengthen the information base upon which to manage our fisheries.

Information from licensing tells us how many people are fishing, where they are from and importantly provides an efficient sampling ‘frame’ for which to target surveys of recreational catch and effort.

In addition, knowing who recreational fishers are helps target angler education campaigns and consultation and thereby strengthens voluntary compliance and engagement in the management process.

From the outset of the review, we were conscious of the potential sensitivities around recreational fishing licensing in Queensland.

It is not the current policy of this Government to introduce an RFL, and the Minister has made this point very clearly in numerous media interviews.

Given the sensitivity, the introduction of an RFL was not something that we specifically requested comment on at public meetings or in written submissions.

Nevertheless, at each of the 17 public meetings the topic of an RFL was raised, as it was in numerous written submissions to the review.

Although there were one or two exceptions, those people who spoke about the RFL in the public meetings spoke strongly in favour of the licence.

Likewise, of the 45 written submissions that mentioned an RFL, 44 were in favour.

While we are very conscious that the fishers most likely to attend public meetings and take the time to prepare written submissions are from the keen end of the spectrum – and most likely to support an RFL – informal discussions with fishers across the state indicated that attitudes towards licensing among the broader angling community had changed over the last decade and that many saw the RFL as ‘an idea whose time had arrived’.

A number of reasons were given though two of the most consistent were the success of the Stocked Impoundment Scheme – that is, anglers were happy to invest if they saw something coming back – and the reported success of similar schemes in NSW and Victoria.

Many fishers thought that the introduction of a licence was an important part of the process of the recreational sector ‘coming of age’ and of the Government giving the sector the recognition it deserved.

Recommendations from the review Freshwater workshops

The study should involve a very high level of consultation with recreational fishers, and ultimately provide advice to the Government on the level of support for various options, the pros and cons of each and make recommendations on a proposed plan of implementation for any preferred future model.

To ensure equity between sectors, the introduction of any new recreational licensing regime should be introduced in parallel with new commercial cost recovery arrangements.

So, there you have it! Freshwater workshops

At this stage, do we have a vote of ‘confidence’ or ‘no confidence’ in Fisheries Queensland?

In 20 years’ time, can we afford this lack of funding?