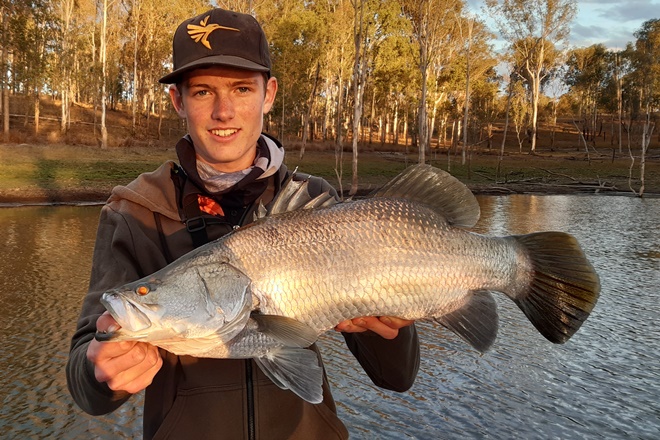 Even though the weather around the Bundaberg area was not as good as the forecast had predicted, quite a few reef anglers still ventured out to have a crack.  The good news is that there was some massive snapper starting to show up on some of the popular marks to the north.  Good reports also came from the wrecks off Bundaberg.  The Barjon and Althea are both holding plenty of bait fish, spanish mackerel and cobia, and if you reach the bottom, some cracking grass sweetlip and coral trout have been caught.  The weather for this weekend should be okay, but as always check the forecast before heading out.

The Burnett has continued to fish well.  At this time of the year flathead are one of the most common captures around the sand bars and rock walls.  Hopefully this latest cool change will trigger more bream to show up in the Burnett.  With the full moon last Wednesday night, the bigger tides should entice the summer whiting to play the game.  Using light gear and fresh bait is the key to landing a few of these tasty fish.

Now the school holidays are over the boat traffic should settle down and both the Kolan and Baffle systems should bounce back to normal.  Even though it was busy, there were plenty of monster flathead, jewfish, bream and whiting to keep everyone entertained.

Lake Gregory has been fishing well for Australian bass over the past few weeks.  Good numbers of bass are schooled up in the deeper water making them easier to target with blades, tailspinners and soft plastics.  Bass in the high 40s have been common, so let’s hope the action continues for the ABT Bass Electric round coming up in the next few weeks.

Another ABT Bass round was held at Lake Cania last weekend and by the reports from the Bundaberg lads who competed, while the fishing was a little tough, some magic bass were landed by some of the best bass anglers in the country.

This barra fishery continues to produce the goods, even in winter.  Plenty of barra were caught last weekend with afternoon sessions providing more action.  Jackall Squirrels, Lucky Craft Pointers and Rapala Shadow Raps are all working very well on the barra that are ranging between 60cm and 85cm and are as healthy as.  With a bit of luck there might be a few barra around the magic metre mark by the time the Tackle World Bundaberg Monduran Family Fishing Classic rolls around in October.