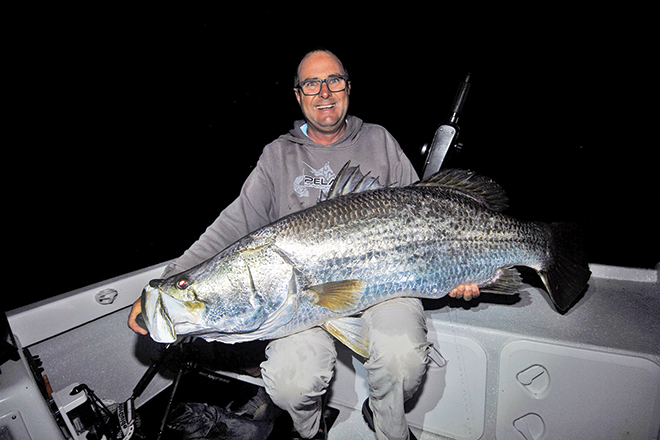 Luke Fallon with his 118cm fish that took out the award for longest fish hooked by a senior angler.

SADLY it’s been all work and no play for the past couple of months and even though I’ve got a beaut new 115hp Yamaha outboard sitting on the back of our centre console, I’ve not yet managed to get the time to hook her up. I did, however, go on a last-minute fishing trip to Cairns to spend a weekend with game boat skipper and good friend Luke Fallon to compete in the 2018 Barra Bonanza held on Lake Tinaroo.

It was last minute because I only wanted to fish if the weather was half decent. A lot of rain was expected and I’ve been caught out a few times after booking flights early only to be disappointed with miserable weather at my destination.

As it was, we were very lucky that the rain stayed down in Cairns and while fishing Lake Tinaroo, the conditions remained dry. Tinaroo is situated in the Atherton Tablelands and is near the townships of Atherton, Malanda and Yungaburra.

If visiting from Cairns, it’s roughly a 1.5-hour trip by road. Tinaroo is stocked with barramundi and world-record fish have come from this lake. It has good numbers of sooty grunter in its waters but unfortunately large numbers of catfish too, however usually only those fishing with baits will encounter the catties.

Fishing from Luke’s 4.45m Haines was quite enjoyable and although we were fishing a competition, I was more than happy to just be spending time on the water. Though it was quite a tiring couple of days and being the old blokes we are, we went back to our accommodation for a nanna nap here and there.

The fishing on Lake Tinaroo was very tough but we managed to put some barramundi in the boat and our pre-fish went well, with a couple of chromed fish measuring over a metre in length coming in. Because I flew to Cairns and am well aware of the traps that can catch anglers when travelling with rods, I just packed my four Bone travel rods from Wilson Fishing straight into my luggage instead of having to use rod tubes.

They were used with an ATC Combat 200 overhead reel as well as an ATC Valour 5000H spin reel. I used Zerek Fish Traps in 95mm and 110mm sizes along with Reidy’s B52 hard-bodies, casting the points and trolling from spot to spot because of the speed limit that had been put in place due to the low water level of 42 percent.

All the areas I fished last year with Luke were well and truly out of the water this time and our better fish came from casting the points, while trolling accounted for several smaller fish. This is an exceptionally large lake and if you only have a smaller vessel or don’t feel comfortable travelling too far afield, barramundi can be caught nearby the caravan park.

I will never tire of the hard hits you get when casting and the bites we got certainly woke us up when we were beginning to feel lethargic. All in all, over the two and a half days of fishing, 217 anglers competed on Lake Tinaroo using a combination of casting and trolling techniques as well as bait, with 87 barramundi caught over the period.

Luke also managed to get runner-up angler with a total length of barramundi going 5.25m. However, he was well out of contention as the first-placed angler was fishing from a kayak and captured 14m of barra, which was a fabulous effort.

We certainly see it time and time again that those trolling from kayaks catch a lot more than we do from a boat.
Though we didn’t stay at the dam itself, excellent facilities including a boat ramp can be found at Lakeside Motor Inn & Caravan Park, 2 Tinaburra Drive, Yungaburra.