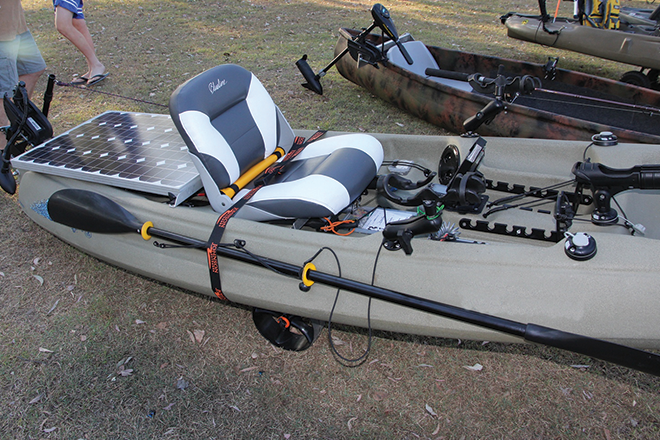 This seriously pimped kayak is clearly aimed at freshwater lakes. Almost nothing would be found wanting with this rig.

Aussie ingenuity in the modern age

IF you asked a group of Aussies what our country’s contributions to humanity have been, you are likely to receive either a blank stare or a reply including Vegemite, Holden and XXXX. In truth, Aussies have been responsible for some very clever ideas.

Dating back to the 1800s are examples of ingenuity including the stump-jump plough, the mechanical sheep-shearing machine, the torpedo and the electric drill. Did you know it was an Aussie who invented the refrigerator in 1856?

As you can see, we Aussies tend to be a creative bunch, coming up with ingenious, often simple solutions to problems as they occur. On a less grand scale, often in a suburban backyard shed, anglers too devise imaginative solutions to challenges.

Take a look at some of the rigs, cliff gaffs, lure retrievers, surf rods and so on that have been created and you’ll see great examples of that famous Aussie ingenuity. The popularity boom in the use of kayaks as fishing platforms has given an avenue for the creative juices of anglers to flow.

Base model kayaks have been pimped by owners who’ve modified them to suit every imaginable fishing situation.
Those fishing skinny water in the freshwater streams around the nation tend to keep their vessels light.
Portaging (carrying the craft between navigable waters) is a part of life in those waters, so any unnecessary accoutrements are avoided.

Every kilo counts when you are dragging or carrying a kayak around cascades, waterfalls and dry creek beds between fishable pools. Conversely, kayaks used in large stocked lakes tend to be kitted out with horizontal rod holders, sounders, side scanners, GPS units, tackle lockers, iceboxes, electric propulsion and anything else you could imagine.

Many tackle storage units are home fabricated to include either rod holders, insulated coolers, battery boxes or any combination of these items. Methods of attachment to the kayak can be imaginative too, though hook and loop fabric or shock cord loops are the most popular and practical.

The hardy band who take their kayaks offshore in search of sportfish also often fit their craft with a number of accessories. My offshore yakking involves either casting soft plastics for snapper or trolling large diving plugs for predatory sportfish such as mackerel, kingies, trevally and other creatures of similar habits.

When venturing wide of the coastline, I’ll always carry chemical light sticks, flares and a personal EPIRB as well as all the angling niceties. A sounder, GPS, horizontal rod holders and a lip-grip device are all part of the ‘essential’ kit I carry when yakking the big blue.

Then there are those who set their sights high, venturing offshore to drift and troll live baits from their yaks. In addition to the add-ons popular with other paddlers, many of these anglers fit home-made live bait tanks to their tiny vessels.

Some clever handymen and women construct venturi water pick-up devices to keep baits happy while others go the aerator route. I’ve even seen kayaks with solar panels fitted to assist in providing power to the suite of electronics their owners have managed to install.

Because of the very limited space in kayaks, gear needs to be compact. This creates a conundrum when a means of landing lively fish is concerned. I mentioned lip-gripping devices earlier. These are fine for many applications, though I find they occasionally damage fish, which is something to be avoided when fishing in fresh water where injuries don’t heal as quickly as in the salt.

Grippers also rely on the fish opening its mouth. Because I spend a lot of my angling hours in search of Murray cod and bass, I find grippers to be a hassle in the fresh. Landing nets have issues too. The most obvious is space.

Most landing nets are just too large to be easily stowed on a kayak. Put one in a rod holder and you’ll soon find it being snagged by branches, the runners of fishing rods or worst of all, treble-armed lures.

Gavin Thompson came up with a simple, yet imaginative solution to the problem. He designed a device that is a cross between a landing net and a cradle – I guess you could call it a scoop – specifically for kayak anglers. Marketed as the Bass Action net, his scoop is short handled, narrow (read, fish-shaped) and shallow.

Where the ingenuity has really been applied is in the design of the fabric part of the scoop. The ‘bag’ is tapered from the frame at the front of the hoop to the lowest point close to the handle. This sees a fish slide neatly into the scoop to be snugly cradled in a comfort-lift fashion.

A measure is printed on the mesh of the scoop to allow fish to be measured with a quick glance, without being handled. The mesh is hook resistant, saving those time-wasting tangles you get with so many styles of mesh. The scoop folds flat for stowability, allowing it to be securely carried under the bungees found on the decks of many kayaks.

Being stored flat on the deck means you won’t leave your net hanging on branches as you shoot rapids (been there, done that). So many of the niggling issues of nets in kayaks were solved by clever design in the Bass Action net… great work Gavin!

I’ve been using Gavin’s nets exclusively in my kayaks for about six years now and have yet to find a better addition to the tackle collection.