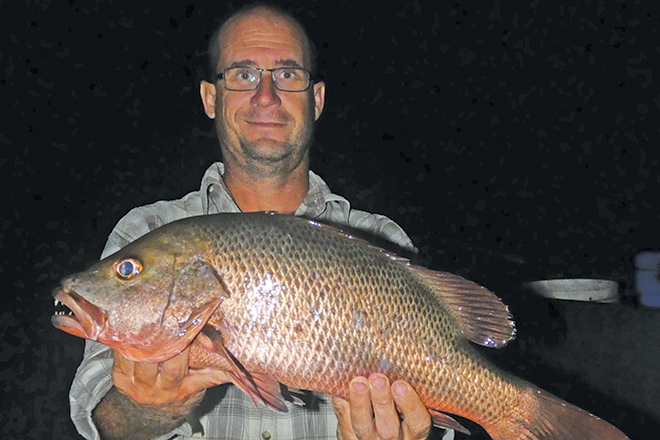 Hang on tight, big mangrove jack are out and about.

One minute you’re sitting there wondering if you’ll ever get a bite – your mind drifts away to wherever a fisho’s mind wanders – and then without warning, you’re struggling to hang on to the rod. mangrove jack land-based

This is how it usually goes for me at least, and this last session was no exception. mangrove jack land-based

I leapt to my feet in a split second, knowing I was not in control of the situation. mangrove jack land-based

The line was stretched to its absolute limit and my hand was on the spool, having set the drag to what I thought was well and truly enough.

Landing mangrove jack from a boat is hard – land based is much harder.

The fish was arching for a snag, but I just managed to muscle the fish to my side of the obstacle.

My last decent bite was about an hour prior, and while the fish put up a solid fight, I was sure this fish was a big jack and I felt the line brush past a snag.

The fish changed tactics and headed for another underwater obstruction.

A few seconds later I had the mighty red on the surface and was swiping at it with the net – it turned out to be a handsome estuary cod.

I was at full stretch, but managed to net it on the third attempt.

The fish snapped at me as I tried to remove the hook, and even though I have caught hundreds of these magnificent estuary denizens, I noticed my hands were shaking.

Wondering if I could have dead lifted the fish instead of mucking around with the net, I had a trial on the hard ground.

I didn’t even get three quarters of the fish’s weight off the ground before the line snapped where it had been compromised by the snag I’d felt during the fight.

Even though I don’t dedicate as much time to them as I used to, mangrove jack are definitely still one of my favourite fish.

Luckily there are a few of them getting around at the moment because there isn’t a whole lot else to fish for.

Normally this month I’d have a few mackerel photos to show, but not this year.

I’m sure they’re out there, however access has been a problem.

Constant wind and swell varying between scary and massive have been the norm for the past month.

As a result, no mackerel for me.

But that’s bearable when I’ve got many land-based jack options just a few minutes from my house.

Flathead have been poor for the past month and whiting equally frustrating.

Mud crabs are slow but there are enough to put a small feed together with persistence.

Keira and I have done a few trips to the Tweed with only a few legal and plenty of little crabs.

The Brunswick River is worth a fish for school jewfish and grunter bream, and gratefully mangrove jack have been in OK numbers.