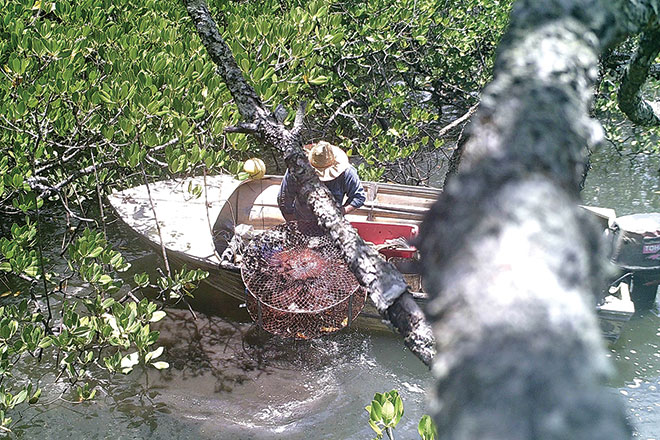 FISHERIES Queensland has successfully prosecuted two licensed fishers in separate cases of interfering with crab pots that belonged to other commercial operators.

Ingham
A fisher from Ingham pleaded guilty in the Tully Magistrates’ Court to four charges of unlawfully interfering with fishing apparatus. Surveillance cameras set up by another commercial fisher photographed the defendant removing crab apparatus from the water in Hinchinbrook Channel.
The magistrate issued a penalty of $5000 and awarded legal costs of $2298, with no conviction recorded.

Gladstone
A fisher was found guilty and fined $7000 in the Gladstone Magistrates’ Court on five charges of unlawful interference with fishing apparatus. Queensland Boating and Fisheries Patrol officers intercepted the Gladstone fisher’s vessel at Gladstone Marina and found 19 crab pots that belonged to other licensed fishers, with 14 live crabs inside.

QBFP district manager Greg Bowness said crab pot interference by commercial and recreational fishers is prevalent, with instances being reported regularly to Fisheries Queensland. “In this case, the offender caused the commercial fishers who lawfully owned the crab pots some financial loss when they were deprived of the use of their fishing apparatus,” Mr Bowness said.

“The intervention of QBFP officers means all their fishing apparatus was recovered and will be returned to its rightful owners.” QBFP relies on the ongoing support of the community to provide information about suspected illegal fishing activity.
If people suspect illegal crabbing, they should report it to the Fishwatch hotline on 1800 017 116 so it can be investigated.