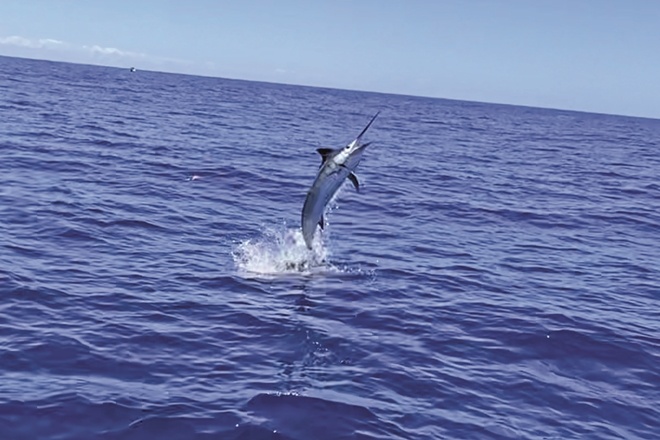 These fish are awesome fun on light gear.

BEFORE I get started, I wanted to let you know I’m not an expert at catching Gold Coast marlin, however I do want to relay what worked for a couple of friends and myself on a recent trip out from the Gold Coast. The plan was to head out through the Seaway, check out a few of the wave rider buoys and then onto Spot X. Gold Coast marlin

Despite one of our crew setting his alarm for pm instead of am, we still managed to get offshore at a reasonable time. He had the lunch unfortunately, so we were forced to wait I may need to review this for the next trip. Light breezes were forecast for the morning with a northerly coming in after lunch, so the plan was to be back before the wind started to kick in.

On the way out, we checked a couple of the wave rider buoys but they were devoid of any fish. I guessed the amount of boat traffic around one buoy was partially responsible for this. Undeterred, the 685 was pointed east again and we made the journey to Spot X. For those who do not know where this is, here is a GPS mark for the general area S27⁰54.588′ E153⁰48.081′.Gold Coast marlin

I normally don’t give out GPS marks, but this one seems well known and I want more people to try this form of fishing because it can be very rewarding. Before heading out, we did a bit of checking around to see what techniques were working and the generally consensus was live baiting was the way to go. As this was the main plan for the day, rods were rigged the night before – thanks George.

A roll of trolling lures was also thrown in, as you never know what might work on the day. Our plan was simple, find bait, jig up bait, put bait down and wait for the reels to start screaming. Almost sounded too easy, but there were a few other things we took into consideration.Gold Coast marlin

First, the bait. Fortunately, there were massive schools of bait showing on the Furuno FCV-295, so bait jigs were deployed and a mix of yakka and slimy mackerel were caught. We discovered later, the slimy were the way to go because all strikes came from them. We also learned on this occasion that the slimy were towards the top of the very large school of bait, which meant we needed to target this area.

Slimy are not as hardy as yakka, so care needed to be taken when getting the off the jigs and into the live well. It’s also important to make sure they go back in the live well when you are running back to start your drift again. While you are getting your bait, I suggest checking out your drift so you know which way to face the boat and where to actually start.Gold Coast marlin

Distinct from fishing for bottom-dwelling reef fish, you’re better of trying to drift along the edges or off the point of the bait – which is the front of the school – as bait will generally be swimming into the current. In terms of the rigs, it was basically a floating rig that you’d use for snapper. Though we crimped the sinker about 3-4m above the hook to let the bait swim around more naturally.

Sinker size varied and we ended up downsizing the sinking because there wasn’t much current. The leader used was around 100lb, but having spoken to a few people since our outing, you could get away with 60lb, which may also result in more hooks. This was connected to a wind-on leader attached to 8kg or 15kg mono and were matched to 8-10kg Garry Howard game rods and my Venom overhead rod.Gold Coast marlin

Our reels of choice were Shimano Tyrnos in 16 and 20 sizes. Interestingly of the five fish we hooked, four were on the 8kg, which shows lighter might be the better way to go for more hookups. To allow the bait to swim as freely as possible, it was attached to the circle hook by needle and thread. This also allowed water to go through its gills, so they stayed alive longer.Gold Coast marlin

It also meant most hook-ups were in the corner of the mouth, making for easy release. If you’re planning on trying a bit of black marlin fishing, be sure to get a good set of gloves because their bills are sharp. Also be aware, when you grab this fish on the bill they will often thrash around, especially if a bit green, so be prepared to hang on and keep the fish away from the gelcoat – which we managed to do.