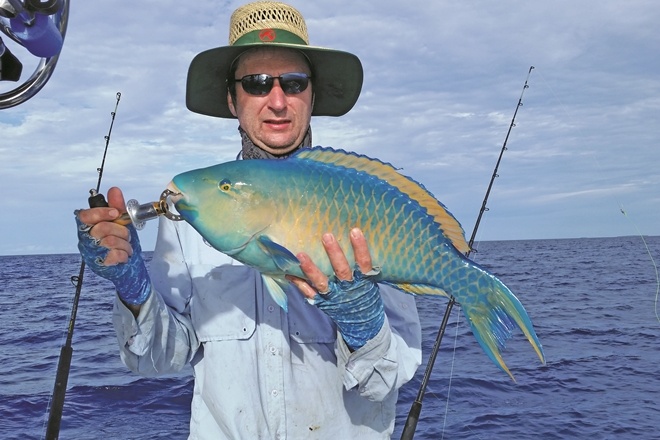 Stefan with a nice parrotfish caught by the tail on a bait jig.

STEFAN Slomka received a call from his friend Ian wanting to do an overnighter because predicted conditions in a few days’ time were looking prime. After checking maps and pondering weather forecasts it was decided to make it a Seventeen Seventy rematch after their successful trip around the same time last year. Ian’s son John joined them on the trip, keen to catch his first coral trout. rematch 1770

They watched the weather nervously though fortunately it was going to get better and better, according to the Bureau of Meteorology, so the trip was a goer. Stefan was up around 3am to head to Rainbow Beach to meet with Ian and John for the trip north. It was an uneventful trip except for the torrential rain they encountered, which dumped plenty of water on the road. Thankfully, mainly due to a good Christmas, they had plenty of weight aboard, so there were no aquaplaning problems.

On arrival at 1770, it took around half an hour to fill up due to the crowds, but time was on their side as they had planned a double overnighter to make the most of the occasion. After launching they spent a little time in the creek trying out Ian’s new electric motor. It took a bit of playing around with to get it worked out though it turned out it was well worth the effort. Once outside they tried a couple of marks in close but could only manage a few grinners, which are good bait for red emperor, so not a total loss.rematch 1770

The next spot looked better and the team put a nice feed of squire in the Esky, while John caught the first red for the trip. Finally, the boys dropped the pick and settled back for the night in prime glassy conditions. They did manage to fish for a short time but sharks taking too much gear was the prompt for hitting the hay. They slept through the pre-dawn bite but there were still fish around and both John and Stefan hooked trout with the first drop of the day.rematch 1770

John was pretty stoked to have landed his first coral trout, which worried the other anglers if he thought units over 3kg were the norm up there. They persisted and landed another nice trout plus a few bits and bobs until once again the sharks arrived, forcing a move on to greener pastures with any luck. After sounding around an area close by, Stefan found what he had been looking for with fish marking close to the bottom in a tight little school.

They dropped lines and were immediately on to a hot bite with grass sweetlip, trout and reds popping aboard in quick succession. Ian hooked the nicest red for the trip and actually cracked a smile when it came aboard. This session went on for about half an hour and finished off with a nice cod. Exploring out wider the current was not quite to Ian’s or John’s liking, the fish weren’t too keen during the middle of the day either and after lunch the fishers headed back in a little closer.

John hooked a stonker grassie, which looked all of 6kg, but lost it at the boat due to an undetected nick in the line. Keep checking your rigs or it will end in tears and to say John was devastated was an understatement. Re-rigged and back in the water, he then hooked an even bigger fish that was snaffled 10m under the boat by the tax man, this didn’t help his mood one bit. Heading to another spot for a little drift fishing, things started off slow but John finally hooked a nice grassy, which cheered him up slightly.rematch 1770

Ian decided to have a break to watch the fun as John and Stefan were on in a double hook-up. Stefan’s was off like a steam train and he was hoping for a nice red because John had just brought his into the boat. After a 15-minute battle plus a great deal of puffing and wheezing, Stefan could finally see colour in the distance and immediately called it for a big red. Unfortunately for him, this was a case of premature adjudication, with the fish turning out to be a massive chinaman over 1.2m long.rematch 1770

It was certainly a beautiful specimen when lit up bright red but not a specimen to take home to brag about. Fishing continued with John onto a great grassy of about 4kg, which was his personal best for the trip and helped to ease the pain of the previous losses. Stefan dropped a bait jig down and immediately hooked onto a monster that took 10 minutes to bring to the surface on the light gear. You wouldn’t read about it, but he had foul-hooked his first ever parrotfish in the tail with one of the little whiting hooks, it was a dead set fluke that it stayed on.rematch 1770

As the day drew on more grassies landed in the boat along with John’s cracker trout, the catch of the trip at over 6kg. Finally, a smile that couldn’t be removed from his face. The bite was hot but with a good catch in the Esky the fishos decided to leave them biting and head home a day early, knowing they would be there next time.