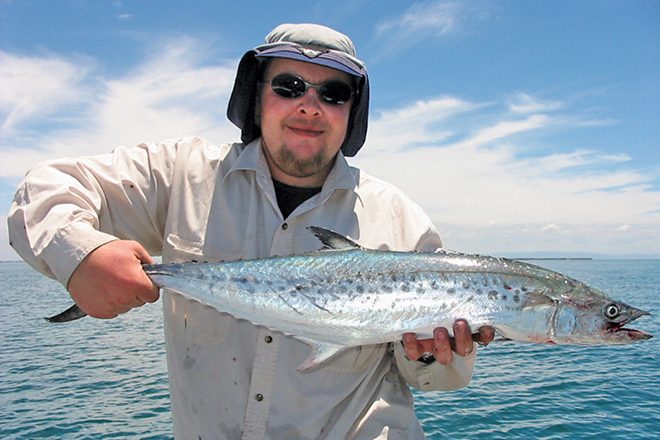 Graham’s spotty mackerel was the result of getting to know the movements of baitfish and predators close to home on Moreton Bay.

Our ever-evolving reality in these ‘interesting’ times has changed our perception of many aspects of life. Many of us had fishing trips to venues far afield routinely scheduled for our angling year before ‘travel restrictions’ and ‘border closures’ became part of our vocabulary. Living so close to Queensland’s southern border meant that NSW waters were regular haunts for thousands of Bush ‘n Beach magazine readers, myself included. local familiar territories

The percentage of my fishing south of the border was not obvious until after border closures became necessary to slow the spread of the virus. A winter favourite, all of my luderick outings were undertaken in northern NSW and have been missing from my calendar for a couple of seasons now. A significant chunk of my Murray cod angling too was undertaken on the southern side of the border. local familiar territories

Likewise, fishing for bass on the big rivers, chasing schools of salmon from the beach and flicking flies at trout in the New England high country have been sorely missed over the past two years. On the positive side of the ‘new norm’, fishing our local systems has highlighted the benefits of angling familiar territory. Fishing locations close to home tend to be those on which we spend the most time. local familiar territories

This in turn translates to the habits and seasonal movements of fish becoming familiar to us. Regularly productive locations within a lake, reef or river are added to our knowledge base and allow more time to be spent at these hot spots. For example, Moreton Bay can be hard to crack for newcomers to the region and ‘once a year’ anglers. Being so close for many of us, it is handy for quick excursions when the weather looks good and spur of the moment outings.

Selecting a target species and indulging in plenty of hours of reconnaissance will eventually lead to repeated success. Even when chasing pelagics, the same areas will often hold fish at a particular phase of the tide for weeks on end. Those spots of regular fish activity added to your GPS will give a shortcut for future outings.

The key is time on the water observing – easily achieved when fishing close to home. You’ll eventually determine a pattern, knowing spot A is reliable at first light, spot B during slack water, spot C during a run-out tide and so on. Learning about our stocked lakes is a similar process – spending enough time on the water to establish a pattern of fish activity in given locations.