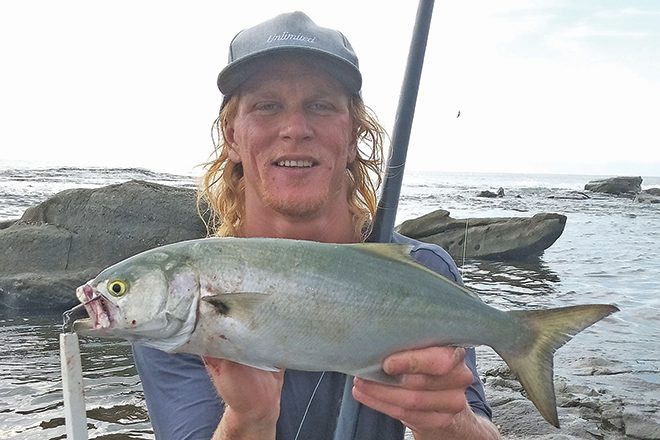 Mischa with a chopper tailor from the Iluka Bluff.

Grief from gusts in north NSW

Believe it or not there was a time when the vast majority of people who owned four-wheel-drive vehicles where either hunters, farmers or fishers. These days everyone has one, and vast areas of the state including beaches and state forests are being locked up due to the large number of reckless and stupid clowns who have no regard for the safety of themselves, those around them or the general public. gusts north NSW

Sadly, these people don’t give a damn what places are locked up – they simply take their big 4WDs and little peabrains to the next available location, and the story continues to repeat itself. Thankfully, this is one area of life where the average Joe is starting to fight back against these clowns – by videoing their antics and handing the footage to the police. Locally, this has happened on more than one occasion and along the beach at Shark Bay recently, and to their credit the police have been more than happy to convict the offenders. gusts north NSW

Believe it or not, doing burnouts and doughnuts on the beach carries the same penalties as if it were on public streets and actually falls under hooning laws. So be warned – if you or someone you’re with gets the urge to act hard-core on our local beaches, those of us who love and appreciate the access we still have will fight to keep that very privilege. gusts north NSW

Hooning can be reported to Queensland Police either online or by calling the Hoon Hotline on 13 46 66. On the fishing front, the far north coast of NSW continued to be battered by 30-knot wind – from the west, north and south, with maybe one or two days a week when the wind actually abated below 20 knots. When I was a youngster, I used to thrive on such conditions, however I’m now far from young and look for any excuse to not go fishing.

Inside the Clarence River, luderick have re-appeared in reasonable numbers at the old ferry approach at Iluka, with a few nice fish even coming from the jetties upstream at Harwood opposite the pub. Whiting have been the big movers and shakers, with some honking fish to a tad over 40cm being landed along the southern bank of Goodwood Island during a falling tide at night, while over on the Yamba side of the river, Romiaka Channel has been the pick of the spots for these tasty little critters.

Flathead are spread far and wide with nice pan-sized fish up to 50cm being boated as far upstream as Brushgrove on fresh school prawns and white pillies, and of course the old soft plastic lure is also taking plenty of fish. Jewfish have been taken on minnow lures from the headlands at Iluka Bluff and Lovers Point over at Yamba, with the average fish weighing in around the 10kg mark.

Meanwhile, both the Yamba and Iluka breakwalls are producing the occasional larger fish on squid bait at night during high water and a handful of schoolies on soft plastic lures during a slack low water.