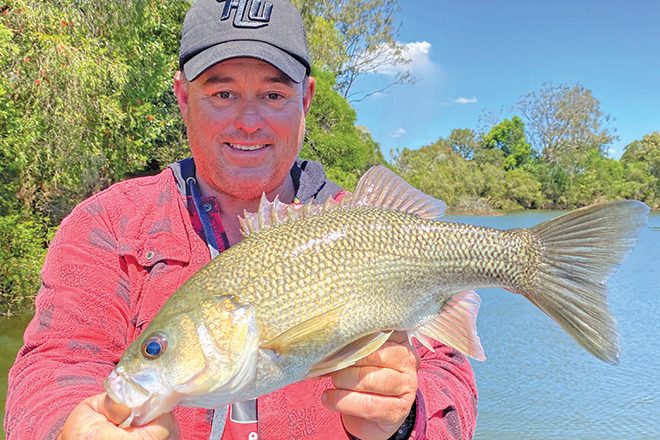 Well yet another year appears to have virtually flown by and it won’t be not long before the big bloke in the red suit is here. I get the feeling that we’re going to have a very turbulent summer, with some destructive storms and plenty of rain coming our way. So, I would suggest taking every opportunity you can to get out on the water and make the most of this time of year while you can. O ffshore current

The summer species in the river are starting to fire up and the offshore fish are not far behind them – the next month around the Northern Rivers is going to be great. The current offshore appears to have kicked into summer mode and over the past few weeks is running down the hill at a great rate of knots. This is typical for summer, but it does make fishing anywhere from the 48-fathom line and beyond a very difficult option at best and nearly impossible on some days. Offshore current

Even with the quite strong currents, some good quality pearl perch have been taken from the 42-fathom line out to about 65 fathoms. Slow pitch jigs had been having a fair degree of success until the current picked up. I do think jigs will still produce fish over the next couple of months, but anglers will need to make the necessary adjustments and significantly increase the weights they are using to counteract the increase in the speed of the current. Offshore current

The current has also caused the baitfish to ball up and compress in and around a few of the pinnacles out wide. Kingfish certainly enjoy this time of year, as it’s easier for them to attack schools of bait when they’re more tightly compacted. Unfortunately, similar to pearl perch, it can be very difficult for anglers to target them with either bait or jigs due to the increase in current.

However, if you’re willing to persist and manage to get the jig or bait in the zone, with a bit of luck, you can certainly have great success over the next few months. The increase in current has brought with it a steady increase in water temperature and this has enticed some small black and striped marlin to town.

As usual, skirted lures have been able to tempt a few fish, though a couple of smaller models have been landed or lost on bait or soft plastics intended for other species such as snapper and similar. The increase in water temperature has meant the snapper that were holding on the close reefs are starting to thin out. They will probably be there for the next few weeks or so, but then the temperature will ensure that the 32s or wider will be a much better option for them.