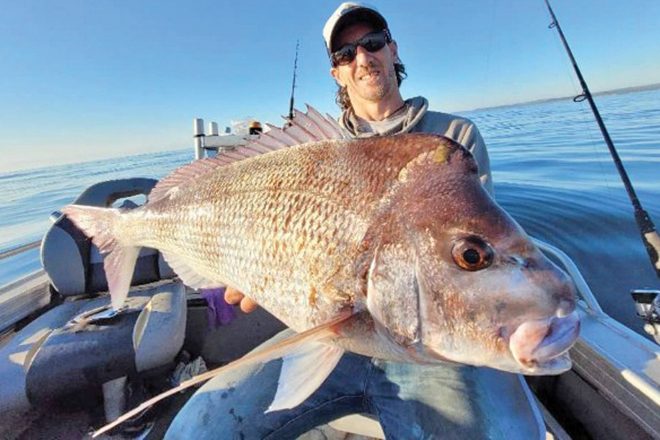 Steve with a donkey of a snapper from the shallows.

Offshore from the Brunswick Byron coast can be a bit tricky this month. However, it’s always worth a look, isn’t it! Sometime in November, mahi mahi will start patrolling the warmer currents out wider. Anywhere between the 32-fathom line and the shelf is where they will be cruising and trolling a spread of lures is going to be the best way to locate them. Offshore Northern NSW

When you find one doing this it is likely to be large and an 8kg fish will be at the bottom end of the size range. Mahi mahi of good size have been reported by spear fishers at the fish aggregating devices off the cape. I saw a few pictures of speared fish from a recent long weekend and they were good, but despite them being around in great numbers, they wouldn’t touch any of the fishos’ bait. Offshore Northern NSW

The water was fairly cool and evidently they had lockjaw. If the blue water pushes into the FAD on the current this month, then it could be game on.
Boaties get excited about mackerel at this time of the year but it’s way too early for inshore pelagics in any numbers. If it is a pelagic hit you’re after this month, best stick to out wide – you might even get a wahoo, though December is usually when they turn up in deeper water. Offshore Northern NSW

It’s always worth a look inshore for a few reef fish at this time and you might score a jewfish or a snapper. Stocking up on pike, slimy mackerel and tailor is always another good task in November. A dedicated bait trip can be a lot of fun and ensures you are in good stead for mackerel season.
If it’s a feed of crustaceans you’re after, November is one of the best months for a spanner crab session.

In NSW, the pro fishers have a closed season starting on November 21, but this doesn’t apply to recreational fishos. If you don’t know where to start looking for crabs, I suggest you keep an eye out for where the pro fishers are and drop some dillies in the vicinity. Failing this, try anywhere between 44-52m of water on the sand.

It is a very easy operation to set a crab dilly or two and then go fishing. To set a crab dilly, you’ll need about 140m of 6mm rope. Because you are likely to encounter current at this time of year, a sand anchor will also be best with a length of chain. You’ll want 50m from your dilly to your anchor and then another 90m to a couple of good floats. To deploy, throw the baited dilly over and drive into the current, feeding the rope out until you reach the anchor and then immediately throw it over the side.

Keep steaming into the current and throw the floats over when all the rope is played out. Let everything settle for a few minutes and mark where your floats have ended up, then go fishing for a few hours and when you return you might have rounded off the trip with a nice feed of spanner crabs.