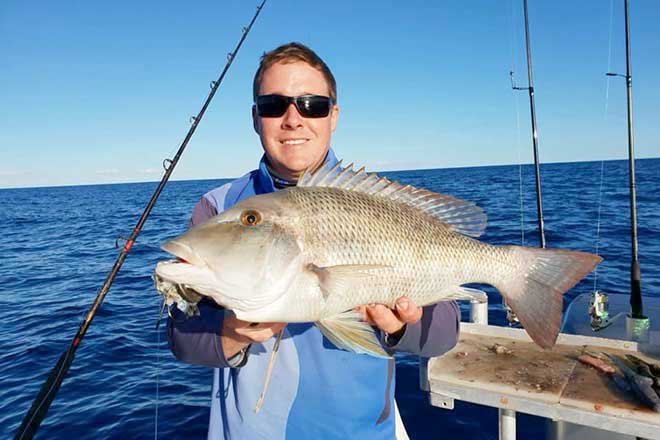 Beau Britton with a big grass sweetlip he caught of Bundaberg.

Lucky break for fishing around Bundy

BUNDABERG OFFSHORE
Well, we were lucky enough around the Bundaberg area to get a break in the weather earlier in the week allowing us to get offshore, and by all accounts everyone caught fish. The Gutters produced some quality sweetlip, coral trout, red emperor, cod and plenty of Spanish mackerel. The outer reefs and islands also fished well with plenty of red throat, coral trout and tusk fish all being caught. Some of the offshore wrecks produced some big red jew, cobia and a few Spanish mackerel.

BUNDABERG INSHORE
The inshore grounds such as Ryan’s Patch, The Two Mile, The Four Mile and the Cochrane Artificial Reef also fished well with some great captures of grass sweetlip, grunter and a few small and large mouth nannygai. There were also a few school mackerel and bluefin tuna about with most pelagics being caught by trolling lures.

THE BURNETT RIVER
The trusty old Burnett still continues to produce some quality fishing. There is a good number of blue salmon about with a few king mixed in with them. Soft vibe lures seem to be doing the trick. All the rock walls are holding good numbers of big bream with lightly weighted soft plastics doing the damage. Most of the sand bars have plenty of flathead and whiting on them with the first of the making tide being best. There has been some quality jacks caught in the deeper holes with live prawns or mullet working best. There is plenty of crabs about with a good number of prawns about as well.

THE KOLAN RIVER AND BAFFLE CREEK
Both the Kolan and Burnett systems have fished well for weeks, with plenty of mangrove jack being caught on the rock bars. Some of the deeper holes have seen some big grunter and cod with live-baiting being best. There is plenty of whiting and flathead on the sand flats and a few big sickle fish mixed in with them. With some recent local rain run-off there has been a few mud crabs about, so this weekend might be worth a trip with the crab pots.

THE ELLIOTT RIVER
Most of the action has been around the Elliott River mouth with plenty of dart, flathead and whiting being caught. The run-in tide seems to be best.

LAKE MONDURAN
Lake Monduran fished very well again over the weekend. A few fish around 90cm were caught, which is a great sign – they will be beast one metre plus barra before we know it!! Fishing the afternoons has again been the stand out bite time and the lure of the week has been the 5” Zerek Flat Shads.