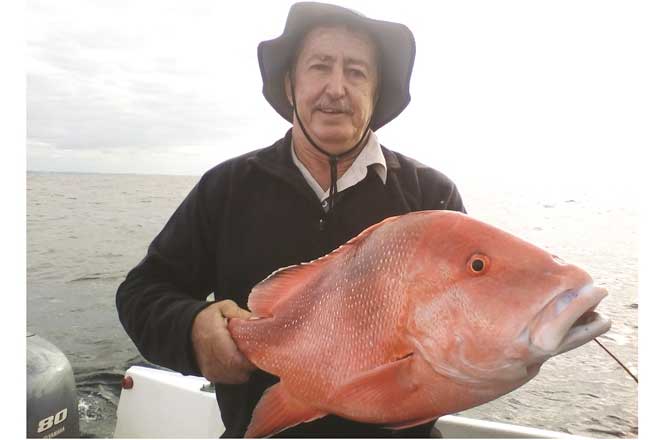 HI everyone, my name is Rick Waugh and I operate a fishing charter business called Big Dolphin Fishing Charters.

We run full-day and extended evening trips offshore from Fraser Island and Double Island Point, departing from Tin Can Bay and Carlo Point and taking four people per trip, making it easier to hook you up. I have a 6m Shark Cat cuddy cabin with rear deck cover and twin 80hp Yamaha four-strokes. I mainly fish with Shimano Baitrunners and know how to anchor up and then shift the vessel without retrieving the anchor, which keeps you on the fish longer.

The grounds offshore from Fraser Island, Rainbow Beach and Double Island have been my domain for many and varied fishing experiences since I was 12. I always get a buzz when a live yakka is slapped by a big reef fish. Control is the key with a big fish. Don’t put your hand on the drag and bust it off, work the fish with the rod and reel’s drag. Sometimes you have to go with the fish if it doesn’t play your game.

I was a commercial fisher for about six years, always deep-sea reef line fishing off Fraser and Double Island Point. I started with Aurora II, a 10m Cougar Cat, doing extended overnight trips from in close to way up northeast on the continental shelf. At the same time, I was commercial fishing and running charters on my own vessel. Then I jumped on Baitrunner for Rainbow Beach Fishing Charters and did a couple of seasons fishing out to about 25 miles offshore and everything in between.

All up in the past 10 years I have done about 1200 ocean days as Master Class V, MED II, open coxswain fishing for every species offshore, but mostly reef species and a lot of big reds over the years. I guess you all love chasing red emperor and so do I. I don’t knock back big grass sweetlip and over the years have caught them up to 10kg. As a young boy I remember going to Hervey Bay and seeing my older brothers coming back from early morning trips out to the beacon at Woody Island. Wow they caught some big grass sweeties and slaty bream, but my time was coming.

When I was about seven years old I would use spare veranda railing posts, trace out lure shapes, cut them out with a jig saw, hand shape them with a pocket knife and take them down to the Mary River to slap silver fork-tailed catfish. I went freshwater cod fishing and did just about any other fishing I could. When you get it into your blood at an early age I guess it’s an instinctual hunting thing.

Anyhow, I like getting hooked up to big fish and hooking someone else up is just as much fun. I spent three years on Cape York in Weipa where I fought it out with about 100 barra, lots of fingermark, king salmon, black jewfish, mangrove jack and anything else that came near me. There’s fantastic fishing up there when the temperature is right.

Over the years I have had many of the younger generation with little or no experience come out on fishing charters. I get them hooked up on a nice 10-15kg goldspotted cod for a first arm stretch and they’re hooked for life. I supply the best bait and catch live yakkas where possible, fishing mainly snood rigs with an 8 ball sinker, a pair of Mutsu 6/0 hooks, 55lb trace and 30lb braid for main line, however it depends on what’s on the chew and which reef is being explored.

I have deck winch posts if it gets a bit too exiting. The main fishing season is from April through to November. I kick off around 5am and return about 4pm for day trips and kick off at 8am, returning around 8.30pm on extended trips, as most of the horses bite on dark. During the last snapper season, just as the sun went down over Fraser Island two rods bent right over with 8kg snapper and the bloke on my side was cracked by a 15kg cobia.

I had three big aggro fish at my feet at the same time – good fun! Check out the attached photos and give me a call on 0497 112 753. Bring on the snapper. Last season was the best I’ve seen off Fraser and even just outside the bar offered really great fishing.