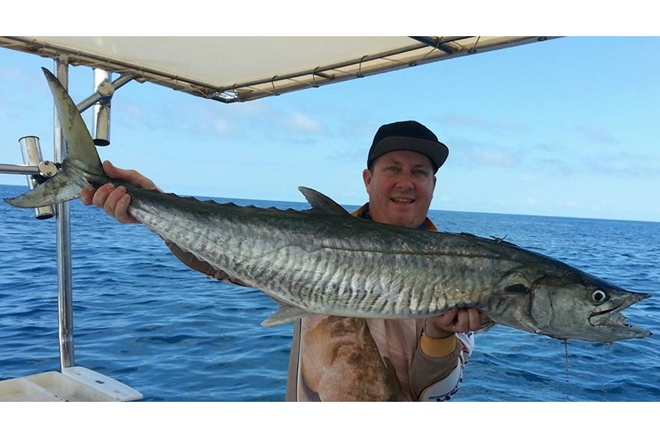 Tim Mulhall with a nice spanish mackerel he caught recently on a floating yakka.

There were a couple of good days of weather earlier this week around the Bundaberg area, allowing some boats to head out and along the coast.

Most of the inshore reefs produced some quality fishing.  There are good numbers of school and grey mackerel moving offshore, with the odd big spanish mackerel mixed in with them.  Most of the spanish have been caught on live baits being floated out behind the boat, and the schoolies and greys have been caught on soft vibes or metal spinners such as the Flasha lures.

There have also been a few snapper and sweetlip about these reefs.  Lightly weighted squid has been one of the hot baits.

Most of the rivers are fishing well also with some good numbers of big bream starting to move in.  Most of the rocky areas seem to be the places to target the bream.  Using lightly weighted baits such as peeled prawns, mullet fillets or chicken gut is the best way to catch a feed.

Some of the sand flats are producing good numbers of sand whiting and sickle fish with a few flathead mixed in with them.

The last of the run-out tide to the first of the in-coming tides are the best time.  There is still a few mud crabs about, so it will be worth your effort, but please be aware of the current Fisheries regulations regarding crabbing.

Lake Gregory is fishing well for bass with most of the bass schooling in the middle of the lake.  This time of year it’s easy to find them by using your fishfinder, then you can target them by jigging soft plastics or small metal blades.

Lake Monduran also fished well this past week with plenty of barra being caught.  With the dam now back at 100% full, we can fish some of our older spots again now that they are back underwater.  Most barra have been caught around Jacks and Insane Bay.  Soft vibes, Zman Swimmerz and Jackall Squirrels have been the stand-out lures for these Monduran barra.