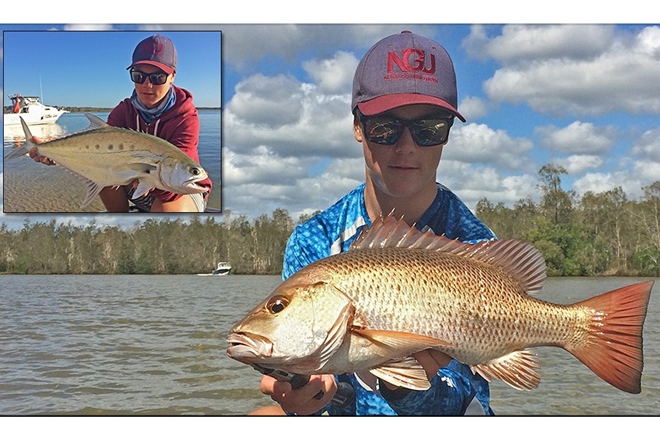 Max Kelly had a ripper session in the river on Sunday morning. First off, he caught and released a 65cm (est) queenfish in the lower estuary on a Z-Man Slim SwimZ soft plastic then later in the morning, up between the lakes, he nailed a 51cm mangrove jack on a Dragon Maggot soft plastic. Photo: www.fishingnoosa.com.au

With the weather looking perfect for the Anzac Day public holiday families were out in force fishing the Noosa River, flathead have been a standout species in the river being taken on live bait, dead baits and soft plastics. Some real monsters have been about with fish over 80 cm mark. Whitebait fished on gang hooks have been a great way to ensure a good solid hook up, add in a scented pink or red dye and the bait becomes just about irresistible to a flathead. Soft plastics like the Zman Minnowz in 3in have been working very well with the stand out colours being Opening Night, Motor Oil and Bad Shad. The use of scent will enhance the productivity of your plastic fishing and is essential if you want consistent results.

There have been some great whiting in the river with fish upwards of 35cm have been consistently caught at the top and bottom of each tide. During the high tide concentrate on the flooded sand banks and as the tide drops move your baits into the deeper sections of your chosen fishing area. Live worms are always a gun bait for these tasty critters. Other bait that have been working well are peeled prawns and squid tentacles. The best catches have been down towards the river mouth, in Weyba Creek and on the sand banks downstream of the car ferry. Another species we see plenty of in the cooler weather is bream.

Good catches of bream have been recorded on the eastern beaches, national park rocks and the groin beach. These fish will start to push into the river over the next couple of weeks as the water temperature drops. Some of these fish can been huge and are known as pilot bream. These fish are old and smart so you will have to be on your game if you want to land on of these beauties. Good baits for bream are mullet gut, foul gut and mullet strips.

Diamond trevally have been in good numbers, these trevally are one of the most beautiful fish in the sea with their iridescent skin with long flowing tendrils that form off the dorsal and ventral fins. Surface lures like the Strada Viral and the Bassday Sugapen have been working really well. Whole fish bait like whitebait and frogmouth pilchards are also claiming some great catches.

On the Offshore scene, with the weather being a bit unsettled over the last week it has been hard to get offshore and have a successful fishing day. For those that did get out it was early in the morning with the closer more sheltered reefs the best, there were some good catches of long tail tuna being  reported with the odd Spanish mackeral being thrown in the mix. The bottom has been a little quite however coral trout are still in reasonable numbers as well as tusk fish and grass sweet lip coming from Sunshine Reef.

The Eastern Beaches have been fishing quite well for bream, whiting and flathead, with the lower tides being the most productive. A few good size mulloway were taken down toward Peregian Beach late last week on live mullet. The guys that caught them had to put up with a few sharks but came up with the goods with three fish being landed with one going 15kg. Up on the Northshore the tailor are starting to show with small schools making their way north. The fish have ben chopper size but great fun on light gear.

In the freshwater; Lots of Red claw coming out of Borumba Dam as well as good size bass and a few yellow belly. Some of the bass have been upward of 50cm. One of our regular customers went fishing with his partner early this week and she caught three fish with the biggest being 53cm. it was the first time she has been fishing for Bass. Lake Macdonald has been fishing well for bass in the narrower parts of the system the Bass seem to be up in amongst the snags feeding on the glut of small insects that the recent rain has stirred up. Lots of great surface action to be had so sciatica type profiles will certainly work well.