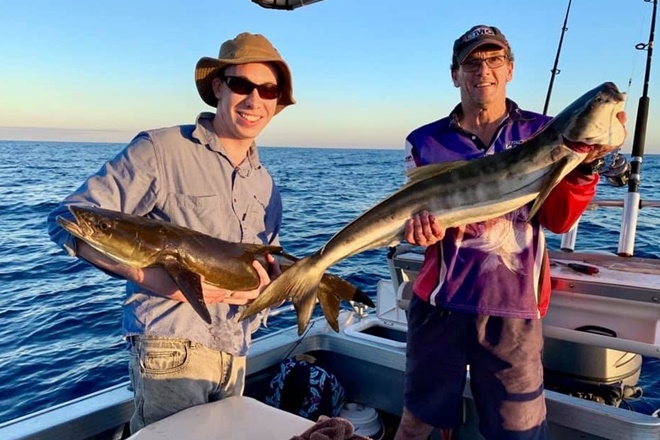 Mike Webb with his nephew, Daniel Westerman. It was Daniel’s first ever offshore trip and he was over the moon that he landed a 104cm cobia.

How good is it to live around the Bundaberg area at this time of the year?!  Once again, the Burnett Heads boat ramp was over-flowing with large boat trailers last weekend.  With the great weather, anglers were able to venture slightly further afield.  By all reports those who put in the miles definitely got the smiles, with some fantastic reef fish caught.  Plenty of cobia, red throat, coral trout, red emperor, grass sweetlip and cod were caught in the magic conditions last weekend.

The weather was so good that even the smaller boats had a chance to get out and fish the many inshore reefs along the Bundaberg coastline.  As it gets cooler, a few snapper and big grunter will take up residence on the closer reefs.  There is still plenty of school and Spanish mackerel cruising around close to the coast as well, so don’t forget to have a floating pilchard or live bait out the back whilst you’re doing some bottom fishing.

The 2019 VMR Family Fishing Classic is being held on the 28th, 29th and 30th of June, and the Burnett River is still producing plenty of quality fish.  Some massive blue salmon to 95cm have been testing anglers skills with Samaki Thumpertail Vibes working a treat.  The bigger tides also stirred up a few nice summer whiting as well as some cracking flathead.  Let’s hope this continues over the next few weeks, and this will ensure there will be plenty of trophy-sized fish caught out of the Burnett for the comp.  Information and registration for the 2019 VMR Family Fishing Classic is available at https://www.vmrbundabergfishingclassic.com.au/

Even though the water temperature has dropped, quite a few mangrove jack were active in both the Kolan and Bafflle systems last weekend.  Plenty of nice flathead, whiting and grunter have been caught towards the mouths.  The Black Bank in the Kolan always fishes well at this time of the year with plenty of big flathead, jewies and queenfish smashing both soft plastics and hard body lures.

Lake Monduran continues to prove itself as a year-round fishery.  Even though the water temperature was only around twenty-one degrees last weekend, plenty of barra were willing to play the game.  I heard of some local lads landing over ten nice barra in one hour on Jackall Squirrels and Luckycraft Pointers, with afternoon sessions definitely being more productive.