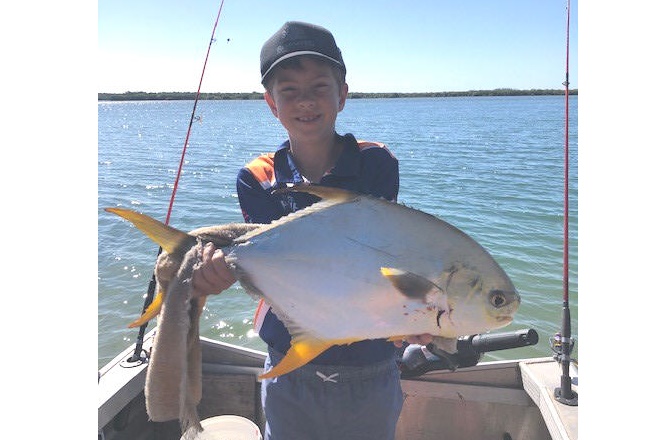 Jack Rethamel with the snub-nosed dart he caught recently.

Lately, we’ve seen ripper fishing off Bundaberg and 1770!  Plenty of trophy-sized coral trout and red emperor has been caught.  Using pilchards and live baits will get you into some tasty trout, and big flesh baits will get you some red emperor action.  Remember to fish the tide change, as that one hour on the tide change can definitely change your day.  There has also been plenty of pelagics offshore.  Even a few small marlin have been caught on most of the popular fishing grounds off Bundaberg.

The inshore reefs have been producing some cracking grunter and grassy sweetlip.  Most of these fish are being caught early in the mornings and late afternoons.  There has been also some nice sized squid around.  The shallows off Elliott Heads seems to be the hottest spot for these.

The mouth of the Burnett River has been alive with plenty of schoolie mackerel and tuna over the past week.  Trolling hardbody lures and fast-retrieving metal slugs around the bait will get you into some action.  Stick with around 60lb leader while chasing the schoolies.  Stay away from the wire and your catch rate will increase crazily.  There has also been some cracking bream being caught and most of them are being caught on small soft plastics and small vibes.  Also, don’t forget to drop the crab pots in – the new moon tides will get those crabs moving.

Both the Baffle and the Kolan systems have been producing some ripper flathead and whiting fishing.  The flathead have been loving slow-rolled paddle-tail soft plastic over super-shallow sandbars.  Pumping yabbies at low tide and fishing the incoming afternoon tide will get you into a nice feed of whiting.  Again, don’t forget to throw the crab pots in.  The three metre tides will get them moving.

Lake Monduran is still fishing well considering how cool this weather is.  Quite a few barra have been caught, measuring up into the 90cm range and they are tanks!  The shallow windblown points have been where all the barra action has been.  The new Samaki Redic lures have been getting the bite for most anglers.