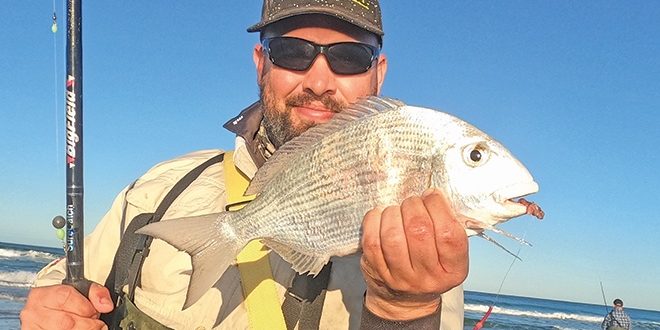 A good tarwhine in the surf on a live worm.

Howdy, with our planned annual trip to Fraser cancelled due to COVID travel restrictions, we decided to stay and fish locally instead. This required a quick rethink of plans based around tides and forecasted conditions, and our much more limited knowledge of Moreton Island when compared to Fraser. Magic Moreton Island

At the top end of Moreton, we focussed our efforts on whiting and flathead from around Dog Creek across Main Creek through to Yellow Patch. We mixed things up here with a combination of bait and soft plastic fishing. Magic Moreton Island

In terms of our bait fishing, there were a few yabbies outside the green zone of Main Creek, but it may pay to bring some with you as there are plenty down towards Day’s Gutter and Kooringal. We also took a bunch of beachworms that we caught on Ocean Beach.

We caught a variety of fish here on bait, with the best being a 40cm whiting my brother caught on a very lightly weighted yabby on 4lb line. This fish and most of the biggest whiting, bream and tarwhine – along with an occasional good flathead – were caught on the back sandbank of the light surf gutters, either casting to them or wading out to them on a low tide.

We also targeted the same gutters but particularly those close to the creek mouths with bigger 5-6” soft plastics and 1/4-3/8oz jig heads. I lost a good tailor doing this, but we did land a few nice flathead, with the best fish caught by Matt – a 73cm model that was carefully released. These light-surf flathead put up an awesome fight on light leader – the waves aiding their fighting prowess. The best wind at the northern end is a southeastly or southwestly and having a little protection from the mainland behind you.

As for Fraser Island, when a southeasterly wind is blowing, the western side of Moreton can be a good option due to the protection the island gives. Though down the bottom end – Day’s Gutter and Reeders Point – are areas more protected from northerly wind.

With the exception of a few days, we didn’t have too many windy days, so focussed our efforts on the western flats from about 2.5 hours before low tide down to the low.
We targeted areas around drains and also weed patches. Targeting any slightly deeper darker water and the weed patches in these areas was critical because the water was very clear during our stay.

Sean caught the fishing bug bad one very cold Canberra day 20 years ago when he was bored and picked up and read Angler's Almanac by the fireplace. Since then he has filled his mind with knowledge from fishing magazines, books, the internet, TAFE fishing courses, guiding fishing charters (estuaries, beach, bay and mountain lakes) and of course 'on water' experience. He and a group of mates formed a social fishing club and soon started to share what they learnt and caught online. Sean is the admin for Ontour Fishing Australia on Facebook, which is a page that shares information, reports and sponsor giveaways and welcomes all to the site. He plans to move into blogging on his new website when time allows.
Previous Sunshine Coast Noosa – weekly report
Next Chasing a feed of flathead