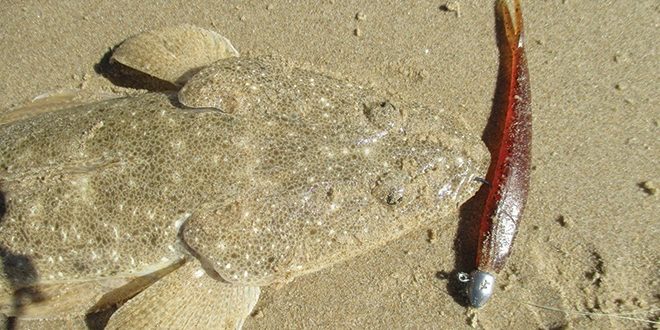 Chasing a feed of flathead

Fishing along the Clarence Coast of northern NSW has once again been affected by a series of strong to gale-force wind and extremely large swells, but having said that the anglers who have been able to fish during the quieter periods still managed to rustle up a half decent feed of flathead, bream and school jewfish. Chasing flathead

Inside the mighty Clarence River, the winter run of jew is well and truly over, however the fact remains that solid school-sized fish to say 10kg can still be taken throughout summer by fishing deeper holes and drop-offs using either live sand mullet, herring or a well-presented 14cm soft plastic lure. Chasing flathead

October is also the month to be fishing the river side of breakwalls with whole octopus over slack high water and then the run-out during a big daytime tide. During a night tide, I prefer to stick to using either whole or stripped squid or even a nice live yellowtail because on average fish taken at night are a lot smaller than those caught in daylight. When using octopus during the day don’t be concerned with getting constant bream picks – I use bream picks as a guide to my bait being in the right spot. Chasing flathead

By that, I mean that if I lob my occy out and don’t get a bream picking at it, I continue to wind my bait back in stages until bream start doing their thing. After doing this style of fishing for over 40 years, my theory is that jew don’t generally patrol the middle of the river during the day, and why would they when the bulk of fish and bait they eat are holed up on the covered nooks and crannies of the wall?

I can’t remember a time when I’ve had a run from a jew during the day without first having my occy attacked by bream, which I reckon attracts jew to my bait to some degree.  During this month I’ll make the effort to get a few octopus and head out to the wall during the day for old times’ sake and to get a few pictures and video of how I fish and rig. I will post any video on the Bush ‘n Beach Fishing Facebook page and include the pics in the November issue.

I actually had a fish this month, and while I was only chasing a feed of flathead off the beach with my son Mischa and his girlfriend Rebekah, I showed the youngsters that this old fisho hasn’t lost his touch by landing a couple of fish around the 50cm mark on soft plastic lures. Mischa and Rebekah have also been getting among flathead inside the Clarence River by walking the weed beds and casting 10cm soft plastic lures and this style of fishing should only continue to improve as the weather warms up.