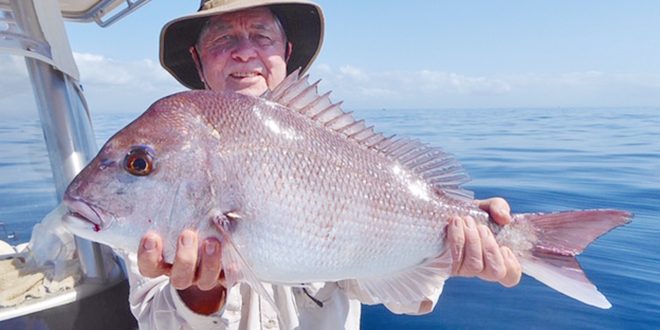 Gerry was very happy with his 75cm Snapper landed off the Gold Coast.

Hi Everyone, hope you have all had a good week, it’s was nice to see some good weather last Saturday giving everyone a good weather window to hit the water and have some fun on the Gold Coast. Unfortunately, conditions mid-week were a bit average with wind, swell and rain hanging around. At the time of writing my report it’s great to see the weekend forecast is looking pretty nice with a return to sunshine, lighter winds and a decrease in swell should put a smile on the face of most fishos. Let’s have a look at what’s been on the bite. Gold Coast Coomera fishing

Last Saturday morning saw some good weather conditions for heading offshore on the Gold Coast before the wind eventually kicked in in the early afternoon. Local fishos Wayne Young and Gerry took advantage of the weather window and headed out early in search of a feed, after sounding around a bit they managed to find a good show on the 24-fathom line that produced some great quality Snapper, 7 fish in total ranging from 50cm to 75cm see photo in report. The current was light, so they opted to float line WA pilchards with a light sinker and this method accounted for the bulk of the great catch. The close reefs have been fishing well lately producing a good mixed bag including Snapper, Moses Perch, Trag Jew, Tailor, Maori Cod, Tusk Fish and some good size Jewfish like the one that Jimmy Jack (see photo in report) was happy with landing his prized catch last weekend. Current depending the 36 and 50 fathom line are also fishing well with some good sized fish on offer including Snapper, Pearl Perch, Jewfish, Yellow Tail Kingfish, Amberjack and Samson. Best baits are WA Pilchards, Squid, Mullet Fillet, Bonito Fillet and Live baits like Yakka’s will always produce the goods. Gold Coast Coomera fishing

Reports are still coming in of good numbers of Tailor being caught around the Jumpinpin area, most of the quality fish have been caught on the last 2 hours of the incoming tide when the water quality is at it best. There has been plenty of bait schooling up which is irresistible to a hungry school of Tailor. Try working the deeper channels around the mouth of the Jumpinpin Bar, Whalleys Gutter and Tiger Mullet Channel, keep and keen eye on the sounder for signs of bait. If you can find bait that is a prime spot to start fishing, also keep an eye on the water for feeding fish splashing as they attack the bait and I also keep an eye out for birds diving pick up bait pushed to the surface or picking up scraps during feeding. Trolling hard body lures is a great way to cover ground and locate fish, try running a combination of shallow diving lures and also a bit of a deeper diver to work out where the fish are feeding in the water column. Once located you can then target fish using either surface poppers, stick baits or metal slugs of various sizes  until you can match the hatch of the size of boat they are feeding on. Tailor are quite nice to eat fresh, just remember to bleed any fish for the table and ice them down as soon as possible. They also make great whole baits trolled for Spanish Mackerel or as Fillet baits offshore for a variety of reef species. Gold Coast Coomera fishing

Clint from Brad Smith Fishing Charters reports some tough days this week I found in our local estuary waters, with fish activity down after the flathead classic. Later in the week the action improved with a variety of fish and squid boated. Using live yabbies and Ecogear Isome worms worked well in the clear, run-in tides. On the run out Samaki vibes, Ecogear ZX40’s, and our new blade lure worked well. Best areas were Crab Island, Sovereign Island, Runaway Bay. With the neap tide sizes and times I’ll be having a go for Flathead, Whiting and Bream on the shallow banks in the Southern Broadwater.

Gavin from Sea Probe Fishing Charters reports the fishing has been a little bit on and off during the week. Dolphin Fish, Snapper, Yellow Tail Kingfish, Amber Jack and Samson Fish were chewing really good on live baits, wa pilchards and jigs but then on the weekend was really hard bite. If it is quite on the 50s  go hit 36s and 24s fathom line for Trag Jew and Snapper.