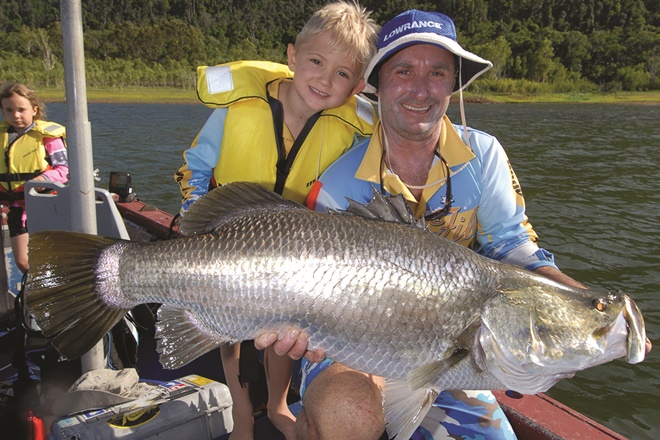 John made it into the metre barra club after landing his second barramundi in trying conditions.

SCHOOL holidays are possibly not the best time to be out fishing, with increased traffic at boat ramps and on the waterways, however we made the best of this busy period by heading north to Lake Proserpine (Peter Faust Dam).

The journey was timed beautifully on New Year’s Eve when we left our home on the southside of Brisbane at 3am and had the best run ever up the Bruce Highway, with no traffic or hold-ups, to arrive at our accommodation at 7pm. Yes, it took a little longer with kids but you have to factor in those countless pit stops when the kids are hungry or ‘busting’.

After taking in the fireworks that night at Airlie Beach for New Year’s celebrations, a late start was made the next morning, unloading the vehicle and packing the fishing gear into the boat we borrowed from Rob’s uncle. Rob also had to adjust the transducer pole/bracket that he made to fit a variety of boats because we wanted to use our Lowrance HDS Live unit and not the electronics already in the boat. The wind was puffing at our accommodation and on arrival at the dam the wind was pretty much howling.

After launching we decided not to travel too far afield and fished a short distance from the ramp in a bay that was somewhat protected from the onslaught of wind. We anchored adjacent to a weed bed that Rob had fished during the Zerek Barra Tour and cast our lures towards it. Fishing away from the timber in reasonably clear territory also meant it would be easier for the kids to get a barramundi to the boat without the chance of a fish busting us off on structure.

The gusts of wind made the fishing difficult, with a constant belly in the lines, however it was still possible to keep in touch with the 95mm Zerek Fish Traps. Our aim for the trip was to get the young fellow onto a barramundi because for over a year he has wanted to catch a barramundi and a marlin, as he has been fascinated by these two species. Casts were made for a couple of hours and hats off to John for persisting with the task and continuing to cast, even though the fishing was quite tough.

Finally, Rob hooked a barramundi and a quick swap was made so John was in charge of the rod. The drag was backed off so any sudden lunges wouldn’t see the rod go into the drink but John put in a great effort throughout the fight. Because John can’t reach as far as an adult, Rob assisted when the fish went around the motor and under the anchor rope, but otherwise our five year old managed to do the rest by himself. The smile on his dial was one that this proud parent will never forget. And neither will we forget his excitement and fist pumping the air.

He had achieved his first barramundi and at 96cm, it was a very healthy and heavy Faust barra. And what a way to start 2019! The fishing was slow, so after lunch we headed back to Rob’s uncle’s place. The following morning we arose early to try to beat the wind, but it was still blowing at 5am. Motoring over to the same spot, we once again anchored and peppered the edge of the weed bed with casts.

Looking at the HDS Live sounder, fish could be seen swimming under the boat, however the second fish for our trip was hooked on the face of the weed bed on the Blackjack coloured Fish Trap. Again the rod was immediately given to John, and with Rob forgetting to back off the drag this time, John found the going a bit more difficult. Nevertheless, he gritted his teeth as the huge fish jumped and lunged boatside.

At the end, the young fellow just couldn’t hang onto the rod any further, and with the fish as buggered as John, Rob netted the fish. The fish was quickly measured at a metre and John was stoked to have caught another fish that moved him into the metre barra club, especially as such a fish has also eluded so many adults.

Though the forecast was for 10 knots, each day the wind was much stronger, so for the rest of the trip we decided to do other activities instead. We mostly used spinning rods to cast the lighter lures in the breezy conditions and with John not yet mastering a baitcaster, he stuck to a spin rod for its ease of use.

Leeann Payne has been writing for magazines for over 20 years and specialises in beach, estuarine and fly fishing. She has fished around Australia and has caught a large variety of species from marlin, sailfish, bonefish and barra on fly tackle to reef, pelagics and impoundment species.
Previous Aussie Salvage Squad crew member fined for taking female crabs
Next Stealth fishing tactics key to success