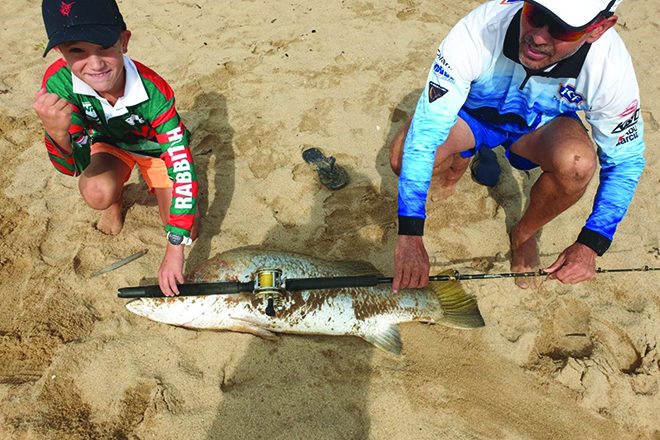 The fist pump says it all! Having tamed the beast, Archie and the author quickly used the Abu Garcia sword to get a measure before releasing her so their fishing tale would have some substance and an even bigger girl would be caught one day.

IF fishing teaches you anything, it’s patience.

Patience is a virtue rarely seen in an adult and even more rarely observed in a 10-year-old. Recently, my youngest of three amazing boys achieved what many of us only dream about: his first metre-long barramundi.

Having spent many years in the Townsville sport fishing and game fishing clubs, at a time when my bum could handle an aluminium seat and I had the courage to drink cans of Coke out of the bait Esky, I fully appreciated the significance of this life moment. As we all know, barra rarely play by the rules and there are more theories out there for how to catch them, how to hook them and then how to best fight them than there are options on a dating site. Interestingly, we were not targeting barra that day.patience

Living in Cairns, barra are not to be caught or targeted between November and February and any barra that happen to be caught need to be released. Thankfully, Archie had a fascination with sharks and being school holidays, I promised him a shark longer than his arm.

To increase his focus, we watched the original and the best Jaws movie, joined the 1.75 billion other people singing “baby shark, do do do” and taught him the context whereby he could use the famous line: “You’re gonna need a bigger boat!”

I heard Siri from my room pleasantly waking my very excited son at 4.30am. Our plan was to catch some big live mullet and land base ourselves on one of the Cairns northern beaches. The weaponry would include a ganged hook, a few feet of wire and 50lb braid.patience

Only the biggest mullet would be used and only the toughest, most patient 10-year-olds would get the opportunity to do battle with a great white (the species I had decided to label any shark he was able to bring to shore). I had also explained that while there would only be one winner in the fight, either way the shark would be released (after a photo) as a sign of respect to an animal that has its place in our oceans and wider environment.

We never strayed from the plan and by 6.30am, I had set a rod as described on the beach with a big 30cm mullet that somehow survived the 15-minute journey from the bait collection point to ‘Shark Alley’ (a somewhat fictitious location given to my son with the intention of adding to the anticipation). Most kids after 10 minutes would have questioned their decision to rise before the sun, or expressed the hunger that had resulted from a rushed breakfast, or asked my favourite question regarding the length of time it would take to get a bite… but not Archie.

He sat beside that rod holder with his eyes fixed on the spool for over two hours – talk about patience. He never asked me one question, complained of boredom, hunger, nor did he mention the north Queensland sun, which had now started to bite down on us both pretty hard.

At 8.47am, Archie got his moment. The ratchet started to tick over as the spool gave up some line and right on cue I heard a scream that filled me with both adrenalin and joy.

Archie’s eyes had widened and I could see his chest pounding as he gripped the rod and proceeded to take it from the rod holder. In my calmest voice, I explained that this was what we had come for. It was both a shark and a big one – no pressure.patience

By this point the spool was singing with more purpose than a Barry Manilow love song and that mullet was well down the hatch. In an effort to ensure the best chance of hook-up, I reluctantly (not really) took the rod from my son’s sweaty palms, engaged the strike function and lifted the rod. The hooks set heavy and I passed the rod back to Archie and wished him luck as he marched into battle.

After five minutes or so the battle looked pretty even and then I noticed the line cutting a clear path to the surface. Inwardly I was a little confused because I was not expecting a big shark to surface so soon. My confusion then morphed into a child-like squeal when a horse-shaped barra exploded from the water.patience

Initially, I wanted to grab the rod back off Archie and selfishly take over. However, when I saw the absolute thrill in Archie’s eyes, I managed to suppress my ego and allowed him to enjoy the ride. The battle lasted another 10 minutes and eventually the beast had been tamed and was labouring in shin-deep water.

I told Archie to hold the rod tip high and walk backwards. At the same time, I grabbed the 80lb trace and attempted to drag the barra up onto the beach. As I pulled, the water was receding and the combined pressure snapped the line (rookie error). The urgency of the situation then required me to jump into the water and I attempted to man-hug the now free barra and persuade it to exit the water for a photo. Thankfully, the story had a happy ending and the fish complied.

We lifted the once-in-a-lifetime barra out of the water and posed for a photo that completed an amazing morning and provided ammunition for the tallest of fishing tales. As the barra swam off to fight another day and I shook hands and congratulated Archie, I realised he had learnt more than just the value of patience.

In that moment, I looked into his eyes and saw myself and the reason I am still fishing 30 years later. We never caught a shark that day, but Archie caught ‘the bug’ and I caught a glimpse of a young man’s future.patience