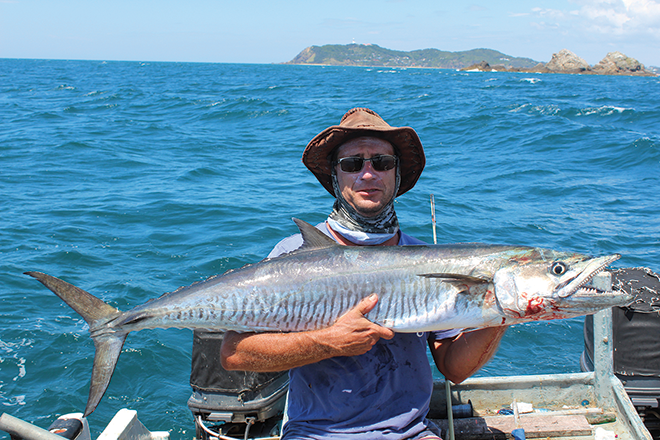 A 15.3kg spanish mackerel caught in a not-so-secret location.

Making the most of mackerel season

MACKEREL season was shaping up nicely until the dirty mongrel rainy weather set in.

You’ve got to look at the positives though, and so far we have avoided a major flood like the one that occurred around this time last year. Everything is sodden though and the rivers have run brown for over a fortnight now. The Brunswick River here has barely had a chance for the tide to run in, as the backlog of fresh water just keeps heading out to sea.

All the mackerel reefs are covered in filthy fresh water and we will have lost a good chunk of the season before things start returning to normal. It’s nothing unusual though, as that is typical for this time of year. Prior to this, the mackerel were biting most days.

A few spotted mackerel were showing up but most days it was all about the spanish this mackerel season. There was a real size mixture among them, as some days we were catching barrees as small as 4.5kg but the next day the fish would be in the 12-18kg range. Sharks have been a huge problem, eating more mackerel than are landed some days.

Lewan and I were trying to skull drag our mackerel to the boat on many days and this often worked on the smaller fish but boy did we lose some. We pulled hooks, broke hooks, broke wire traces and broke the line in an effort to get the mackerel past the sharks.

As annoying as it is not being able to play the fish out properly, I would prefer to break the fish off going hard on it as opposed to letting a shark eat it. They will mostly survive with a hook in them but there is no coming back from being blown out of the water by a monster bull shark.

In the past, I would just up stakes and try a different reef system, but this year every reef you go to has sharks. Last month I was bemoaning the lack of mackerel baits in my freezer but this problem has been rectified thanks to a great run of summer chopper tailor.Without doubt, this is the best run of chopper tailor we have seen for a long time. Schools of white and frogmouth pillies are keeping the tailor around but these bait schools have been here over the previous few years without the tailor in attendance.

I don’t know what made the tailor turn up this year but I’m grateful they came. Both the north and south walls of the Brunswick River have produced good numbers of legal size tailor, with the north wall usually better because the bait often holds between the walls and the rocks.

North Beach towards the end of North Head Rd is also producing tailor of an evening. Back offshore, some quality fish have been caught out a bit wider, with a few small yellowfin taken on Windarra Banks, along with the odd wahoo. Down on the FAD off Cape Byron, dolphinfish have been biting and bigger specimens have been among them too.

A bloke I know headed out to get a few with his fly rod and landed a not-too-common rainbow runner. These fish turn up from time to time but certainly aren’t a regular this far south. If the current starts to back off this month, heading wide to fish the bottom is always a good option after it has had a rest for the summer.

Usually this happens in May though. In the river, the constant fresh water has written off everything but the lower reaches.
This isn’t all bad because the fish are concentrated and less sensitive.Whiting are in good numbers here in the lower Brunz and eagerly taking yabby baits.

Some honker specimens are being caught too, with 40cm fish reasonably common. Big mangrove jack are around the training walls and as I said they are less sensitive to heavy line, so you are in with a chance to bag a PB at the moment. Live baits will work but oily fish baits such as pilchards and mullet fillets are all that is necessary to hook into a big jack in muddy fresh water.

If fishing from the rocks, I would highly recommend the use of 40-50lb line, though you will get away with less from a boat. Of course, you are definitely in with a chance of getting a school jew at the moment. Whole beach worms or soft plastics are your best bet for a floodwater schoolie.

Bream are in big numbers as well. Tailor and bream are traditionally winter species that kick off in about May, but March this year has been great for both.To catch a good feed of bream, all you have to do is fish around any of our training walls in the dirty water with some stinky bait.

Pilchard pieces and mullet gut are as good as any. I’m not talking about the hard ‘onion’ part of the gut. If you can go to a fish shop before your trip, buy whole mullet and use the soft part of the gut for bream and the fillets for jacks. If you are an estuary fisher, a continued fresh this month will be in your favour.

Offshore fishos are hoping for better weather and clean water over the reefs so we can chase mackerel again. April is usually a great month for spotted mackerel, so fingers crossed and good luck with whatever style of fishing you choose.