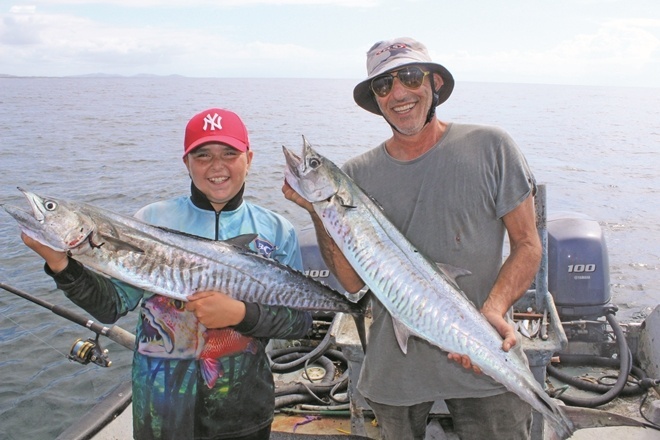 Omri and Zohar with a double to start the trip off.

THE forecast was for a 15-20 knot southeasterly wind and a 2-3m swell. As you can imagine I didn’t set the alarm and, being a Sunday morning, I rolled out of bed at the leisurely hour of 7.30am. As I was munching my cereal, I looked at the webcam site on my phone and, to my surprise, the bar was fairly flat, considering it was halfway through a run-out tide.

A check at Cape Byron revealed a gentle southwesterly wind. In recent weeks, I’d been discussing with Omri the possibility of getting him onto a mackerel, and after a quick text to his dad Zohar, we met at the boat ramp 45 minutes later. Due to the forecast, there were only a couple of other boats out on this almost dead calm Sunday morning, a rarity in these conditions. Magic mackerel Byron

The previous Sunday had seen 112 cars with trailers parked all the way out of the car park and halfway down the road to Brunswick township. The previous few days live bait had been scarce, so my first couple of stops were at the places I’d managed to find a few. The first spot was a doughnut and the second was not much better.

I ended up finding them where there had been none for weeks, but I wasn’t complaining as we now had enough bait to at least see if there were a few mackerel around. It didn’t take too long, about 20 minutes I guess, before a rod went off and Omri was set to the task of fighting his first mackerel. I went to clear another line but noticed it wasn’t in the way so I left it there, commenting it might get another one.Magic mackerel Byron

Sure enough, Omri announced the second rod had a fish on it too and I indicated for Zohar to get onto it. What a great start – father and son hooked-up side by side on a mackerel double. Omri’s fish came to the boat first after a couple of spool-spinning runs, and I gaffed a 7.5kg spanish mackerel.Magic mackerel Byron

Zohar’s pumping and winding efforts had a similar fish at the boat until it decided it wanted to be at least 40m away, then it hit the turbo. “All my efforts!’ exclaimed Zohar jokingly, but he soon had the fish back and on deck alongside his son’s. After a couple of high fives and a handshake, we resumed trolling, hopeful for another quick bite.

From memory the next bite was a double too and while Zohar got his fish to the boat, Omri’s spat the hook. We chipped away for the next few hours, and though the bites weren’t thick and fast we were putting a few fish in the Esky. When the southeasterly wind picked up to about 12 knots, I anchored up and we floated bait out.Magic mackerel Byron

We managed a couple more mackerel, in between Omri catching an assortment of reef fish off the bottom, the best of which was a beautifully marked goldspot pigfish. For a late start it was a fun and successful trip and as we came in the bar, I pointed out a wave breaking behind us. Nothing to be concerned about for us, but I wondered if the swell that was forecast was beginning to come through.Magic mackerel Byron

Sure enough, my friend came through the bar around four hours later and phoned me commenting that the bar was a solid 1.8m. I turned the surf camera on and the bar was closing out, putting an end to thoughts of fishing the next day. I know one thing for certain, Omri was glad the swell arrived 24 hours later than forecasted!Magic mackerel Byron

Coming into April, I’ll be looking for mackerel, with the possibility of a little night jewfish angling on close reefs. On good days, boats will begin heading out wide with reef fish in mind, though I can’t get past the idea that I’m using a lot of fuel to drive past fish by going wide.