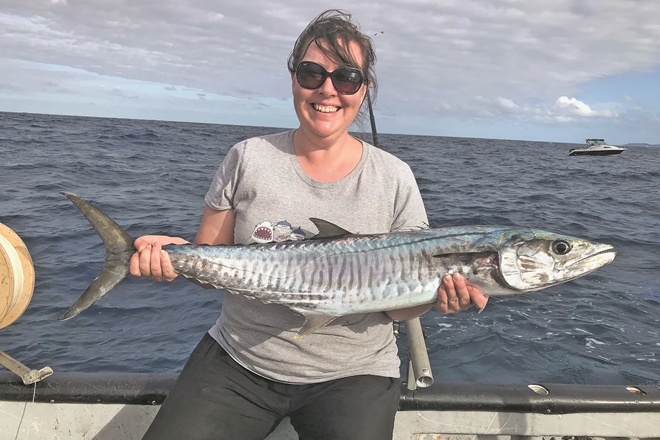 Melissa with a spanish mackerel to kick off the 2021 season on one of the very few nice days.

IT’S hard to know where to start… Last month I struggled to scratch up a couple of photos due to the lack of fish I had caught. This month however the situation has changed, with good fish coming from all of, the different fisheries. Offshore hasn’t been easy with swell on the Brunswick Bar, but when we’ve made it out there were enough mackerel around for the effort to have been worthwhile. Mackerel NSW

Both spotted and spanish mackerel were present – the hard part was the lack of quality bait. For the dead bait draggers, no bonito have shown up here. A few were caught up near the border of NSW and Queensland, but down here… there have been zip. From what I’ve heard most spanish caught this year have been on live yellowtail scad.

Yakkas aren’t my preferred bait for mackerel but by the same token if there’s nothing better available, the humble yakka catches plenty every season. During a season long ago, I even towed dead yakkas with a skirt over their nose out of sheer desperation. To my surprise they were very effective, more so than the live version.Mackerel NSW

I think the mackerel were attracted to the extra speed, colour and movement, and since that day it’s a technique I have employed from time to time. Melissa came down for a visit and was welcomed with clear blue water for her dive at Julian Rocks, traditionally known as Nguthungulli. In the afternoon, we headed back out and caught a couple of spanish mackerel before heading home to prepare for an early start.

The next morning, we were on the water at first light and had a spanish in the boat within minutes. Looking around we saw a few other boats hook-up too, so I thought it might be on but things went quiet after this. I decided to chuck the anchor and berley out. It took a while and a lot of berley but a few spotties started to show up.Mackerel NSW

It wasn’t hectic spotty fishing but as long as the berley kept going, we chipped away at the fish. We’d get a few fish to the boat then a shark would eat a couple, then a missed bite and a bit of busted wire. In between all the drama, we landed a few. Well, I should clarify… Melissa got a few to the boat while I pulled hooks and got sharked.

She had the happy yet uncanny knack of getting fish to the boat – I don’t think she was sharked once. Mind you, one time was close. A spotty came flying out of the water with a big brown mongrel right up it, not once but twice, and Melissa still got the fish to the gaff. I think I only landed one mackerel for the morning.Mackerel NSW

They were good spotties, averaging 5.5kg. Since that morning, we’ve had a fair amount of rugged weather to deal with. Big swells and wind have punished the coast and while we have been able to duck out to the local reefs occasionally, I don’t have much to report from further afield. Windarra Banks will have plenty of jelly bean tuna on it and possibly wahoo.

Our rivers are fishing quite well too, and good flathead are getting around. I reported a few months ago of Toby Hart catching his personal best flatty of 91.5cm on a live bait. Well, he’s done it again with a fish of exactly the same size and caught in nearly the exact same spot – makes you wonder if it was the same fish. There were a couple of months in between, so surely not – but I guess it’s possible.Mackerel NSW

Trevally haven’t headed further back upstream since all the December rain we had but plenty have been in the lower reaches. Mangrove jack are abundant in all their usual haunts, and mud crabs are on the move and filling out nicely. All in all, it’s looking pretty good for March.