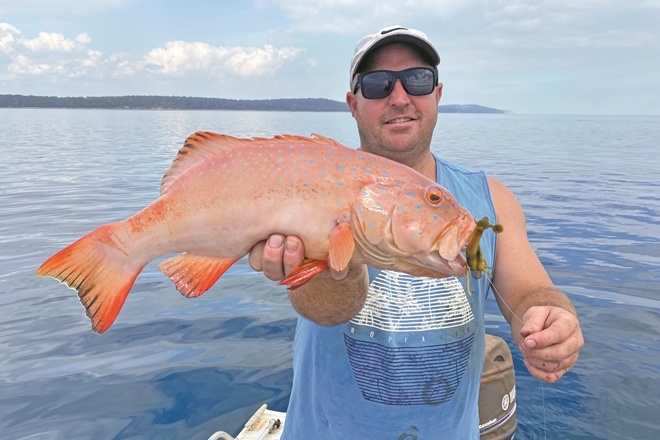 A better quality trout taken by the author.

I’VE always been a big fan of getting away to destinations that I don’t get to fish often. A lot of these trips are often planned with little notice and end up with two swags and an Esky full of cold drinks driving north on a Friday afternoon. Coral trout Hervey

One of my friends had been talking about a spot around Hervey Bay that was holding a few coral trout. He had been there a few times with other friends and always scored at least one trout to put in the Esky. My ears pricked up at these tasty little treats, so the next free weekend when the weather was friendly, we hit the road in search of fish for the Esky.

We arrived at the Urangan boat ramp early on a Friday morning and made our way towards the first mark. The wind was blowing about five knots and was expected to drop out as the morning went on. We got to the spot and had bit of a look around.Coral trout Hervey

We chose a couple of different prawn imitations to start with and it wasn’t long before mine was whacked by a 40cm trout. Shaun was next with a slightly bigger model, also taken on a prawn imitation. The bites slowed down a bit as the tide picked up and the bay glassed out.

Schools of longtail tuna were starting to get very active, so we chased one of them for a while with no success. We had fish swimming around the boat slurping small baitfish off the surface. I’d never seen tuna feeding in that manner before and we didn’t come close to getting one to take our lures.Coral trout Hervey

They seemed to be full and were only eating because they could. We went back to the trout spot and increased our jig head weights to get to the bottom while the tide was running hard. I hooked-up to a better fish straight away, which turned out to be a 50cm trout.

This started a hot bite with a few more trout, several nice grass sweetlip and a small cobia all eating our lures. A couple of ooglies were also hooked that we had no chance of landing on the light gear we were using. As the tide started to reach its peak and slow down, the fish went off the chew.Coral trout Hervey

We had a few fish in the Esky, so we went back to ramp and headed for the caravan park. The next morning was a bit windier. We got out to our spot after a bit of a slog and the fish were hungry.

Unfortunately, someone had told the sharks about all the action and every trout we hooked was eaten. They left the grassies and the cod alone though, so we still had a bit of fun before heading back to Brisbane. A couple of weeks later I went back for another go with my friend Benny.Coral trout Hervey

We found a lot of hungry fish, but the sharks were brutal. Benny landed the only legal trout, but only just. A shark came flying out of nowhere, right next to the boat, but missed the trout by a scale. It was a solid shark at over 3m, which gave us a bit of a surprise and definitely encouraged us to keep our body parts inside the boat.

The last morning was a bit windier, so we went to River Heads boat ramp to have a look around. We didn’t go far and landed several nice flathead on the same prawn imitations we were using for trout. River Heads is a great spot to have a look at. It holds great fish including barramundi, threadfin and jewfish.Coral trout Hervey

On the first morning we put the boat in, I had a 70cm jewie in the boat before Benny could get back from parking the trailer. We will definitely be back for a rematch with the trout.

Hopefully the growing population of sharks will be busy eating someone else’s fish next time.