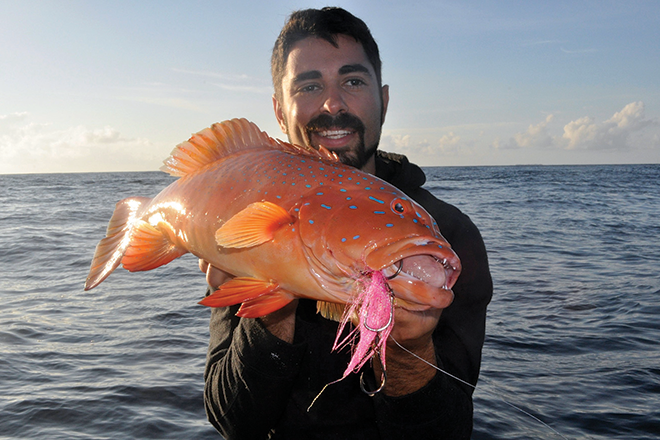 Peter nabbed this trout on a whole US squid and showed how effective adding a fly is.

WHEN we talk about offshore fishing and a five-star table fish, you can quickly narrow it down to a few species.

And the species I will talk about in this article that ticks both those boxes is coral trout. Coral trout, also known as leopard fish, are often found inhabiting large reef systems off the Queensland coast. Fish exceeding a metre have been recorded in our northern waters but the average size you’re likely to see is 65-80cm and anywhere from 4-10kg.

The juvenile trout tend to be the prettier fish, with bright red/orange colours and blue spots all over whereas the larger fish start to lose their brightness and take on a more green/brown colour. Although the blue spots remain, they may be muted and not as vivid as on the juvenile trout. Coral trout are quite different to a lot of other fish in that they are what we call protogynous hermaphrodites, which basically means they are initially females, then become males after they are sexually mature.

The reason I say quite different is because we know of numerous species, such as barramundi, that are born as males before becoming females as they mature. After growing to about 20cm in their first year of life, coral trout will reach maturity at 30cm or about two years of age. The minimum legal size of coral trout is 38cm, which researchers believe is about four years old.

The fight and take is almost identical as well. Coral trout is a very dominant and aggressive species and many anglers like to chase these fish for this reason. You have a number of angling options when targeting trout but in most cases they are caught on the bottom. Although some of the larger models are found in only a couple of metres of water way up north and taken on stickbaits, we tend to chase them off large pinnacles around the Bunker Group of islands.

We have noticed that coral trout hit with more of a reaction bite, which means they don’t really think about what they are attacking. We have noticed the majority of trout takes are on the first drop of a floated pillie across the top of a coral trout’s hole. When fishing the Bunker Group off 1770, I’m sure a lot of anglers will agree when I say if a bait sits on the bottom for more than a couple of minutes in the shallows, your next bite will come from a redthroat emperor.

If trout fishing, we use 30-40lb gear with a running ball sinker that varies in size depending on the current and a three-gang hook rig with a fly attached to the top hook for attraction. Many people ask what bait works best and our go-to bait for trout is whole pillies. Some of us use whole squid but it really comes down to what the fish are hitting on the day.

When fishing with three or four anglers, we ensure everyone is using different baits until we see what gets hit more often. At the end of the day, nine times out of 10 that floated bait falling past a coral trout’s head will get hit, regardless of what it is. Plenty of anglers use large plastics and let them sink against the current, which works too.

It’s called fishing for a reason – everything is trial and error and no two days are ever the same.