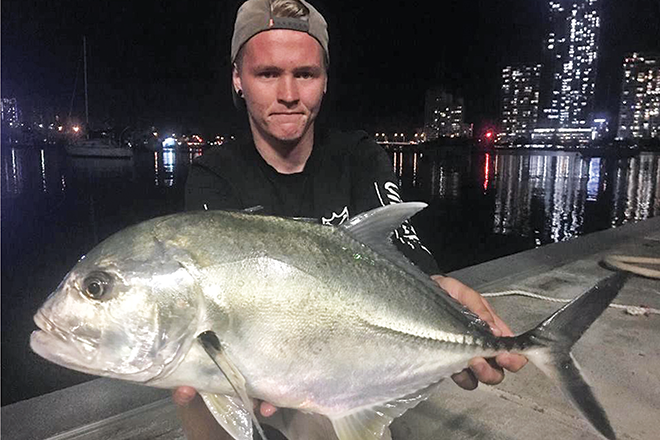 AS quickly as this year came, it has come to an end.

During December, when water temperatures are high, the Gold Coast fishing can be as busy as the shopping centres, with an array of species able to be targeted on a variety of techniques in both the salt and fresh water. With positive fishing reports coming in during November, it looks like being a very interesting holiday period.

Fishing our southeast Queensland inshore waters will see exciting captures of larger fish such as trevally, mangrove jack, estuary cod and lesser-known species including tarpon and giant herring. Trevally have been caught by anglers fishing the low-light and dark periods with soft plastics and surface lures. Trevally are schooling fish and consistently harass bait.

They can sometimes be spotted from quite a distance and when they are in frenzy mode, most lures cast near them are crunched without hesitation, making for a very visual and heart-racing Gold Coast fishing experience. Mangrove jack are starting to pop up in consistent numbers for anglers fishing all types of structure. Areas such as pontoons and rock walls as well as natural structure including tree lay-downs can often hold these fish.

When targeting rock walls, I like using big 4m deep divers such as the 90mm Pontoon21 Deep Rey. These big divers are effective due to the large bib on the lure bumping into the rocks and keeping the trebles away from snags, meaning your lure will be in the zone longer.

Estuary cod are often taken as by-catch when targeting these rock walls, and while welcome, they can provide false hope for people desperate for a jack because they put up a very good account of themselves. However, I feel estuary cod are great table fish. Tarpon will become more prevalent with this warmer weather.

These fish can be overlooked quite easily because they are renowned for rolling on the surface, which often sees them mistaken for mullet. When targeted on light gear they are awesome fun because they can put on a great acrobatic display.

Once they reach lengths of 50cm-plus, you can have a bit of trouble keeping them on the hook.  For tarpon, I like a 1-3kg rod and a 2000-size reel spooled with 4lb braid and a bit heavier leader because they have raspy mouths that can rub through your leader.

My lure of choice is a soft plastic. I prefer the 3” Fish Arrow Flash J Split with a 1/16oz TT Head Hunter jig head. I twitch this lure through the schools until I get a strike. A tell-tale sign that the fish you’re casting at are in fact tarpon rather than mullet is when after a rise, a distinctive set of bubbles is left behind the fish.

In the fresh water, the fishing action is continuing to intensify. The water level is beginning to drop in Hinze Dam and the fish are active, with bass smaller then 30cm willing to hit 1/2oz Damiki spinnerbaits with trailer plastics. However the saratoga are the stars of the show. They are making the most of the warmer water by turning up more regularly. Often they will be seen leaving a boil on the water’s surface as they take off in a hurry.

With Christmas here, people are still thinking of things to do and places to go. Fishing for wild river bass in NSW is an option worth considering, with awesome scenery and a good wild bass fishery on offer. Half the experience is in the journey to get places.

When you fish these amazing waters, you always have the possibility of by-catching eastern freshwater cod. These fish are a no-target, no-take species, but they eat the same food as bass so you may encounter them. Barbless hooks can help in making it easier to deal with and release the fish unharmed.

I’m looking forward to yet another holiday season and action-packed Gold Coast fishing. Merry Christmas and I hope all is well in the new year, with bigger and better things to come. 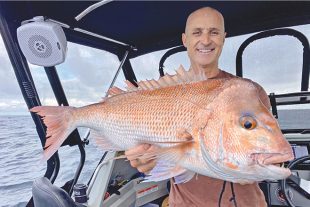 Hi everyone, hope you are all having a nice week. It was good to finally …