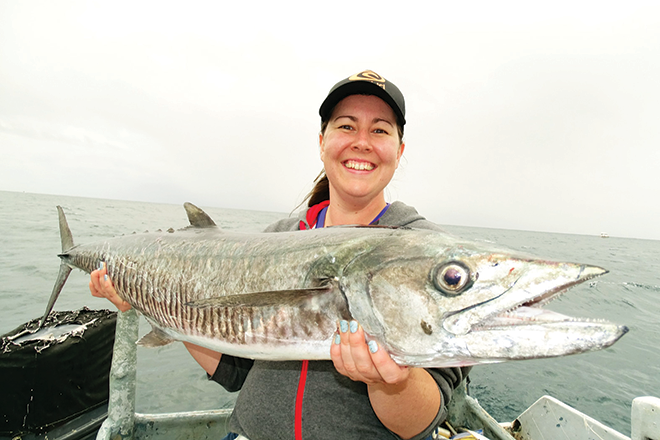 Melissa was all smiles with her first spanish mackerel.

Spanish mackerel turn it on at Brunswick Heads

LAST month I wrote we usually start to see a few pelagic species arrive for a Christmas present.

Well relentless northerly wind put paid to that. Boats got out on December 20 and 21 but the water was cold. Then the northerly wind blew again right through the new year. The first opportunity was a southerly change on January 4 but it was just too blustery.

It was forecast to back off a touch the next day and everyone had the same idea. I reckon 50 boats went out the Brunswick Heads Bar and mine was one of them. Pretty good bait was around in the form of big slimies and a few pike. I wasn’t sure what to expect, so I just threw the anchor out on a bump I have caught a few jew on over the years in the hope of hedging our bets if the mackerel weren’t there.

Feeding out a live pike saw it get bitten in quick time. In a typical mackerel strike, the fish took a big run and then swam at the boat with a lot of head shakes. I had my uncle Ron and cousin Melissa with me and Melissa was on the rod. After a few minutes of good work and with pressure on the line, the hooks just fell out. Welcome to mackerel season 2017.

Boy they can be frustrating fish! I then fed a live slimy out and after half an hour I thought I saw the foam float bob under the water, so I pulled it in to check. Sure enough, the slimy had the short back and sides. Out with another bait and it ended up with the same treatment.

Bait number four produced a solid hook-up and run and Melissa set to work, hoping this one stayed on the line. The first fish had given her a bit of practice and she had good style as she wound this fish to the boat. It wasn’t completely without drama as the fish circled the boat but fortunately went over the anchor rope.

Finally, I put the gaff into our first mackerel of the season, a decent spanish of 11.8kg. We clicked a few photos and Melissa’s phone buzzed away as favourable comments filtered in on Facebook from friends and family who were beginning to wake up. Things slowed after this, so we moved wider and re-anchored.

Another strike resulted in a bite-off. As we sat waiting for further action, we were rewarded with what every mackerel fisher wants to see: a fired-up spanish launching into the air with your bait in its mouth. As it landed, the line came tight and Ron started the fight.

A couple of ripping runs later, I gaffed our second fish from six bites for the day. We didn’t get any more bites for a while, so decided to leave the rain and wind and head for home, but not before trolling up a few bonito off the bar for use as future mackerel baits.

The next morning, Ron and Melissa had to take off at about 6am, so I saw them off and headed out a bit later than usual and found bait in ready supply. I managed another two spanish mackerel, which I was happy with for a late start. Coming back to the bar, I tried to troll up more bonito but they had moved on.

However, I was lucky enough to have a few big-eye trevally take the lure and they provided a good feed. Small trevally aren’t many people’s favourite fish to eat but I love them. The weather was pretty good on this day and a lot of boats headed out wider for the first time in weeks and found dolphinfish on the FAD off Cape Byron in very good numbers.

They weren’t too fussy either, grabbing pilchards, lures and live baits. Kingfish were located on Windarra Banks but I didn’t hear of any small yellowfin tuna being trolled up, which was a bit disappointing. Squire were plentiful on the reefs from the 32-fathom line out to the 55s.

The Mackerel Boulder near Julian Rocks opened on January 1. This is a closed area for most of the year due to it being a known grey nurse shark habitat, but from January to April it is opened because the grey nurse move to colder waters for these months. At the first chance possible, boats raced over there and were rewarded with good squire and kingfish along with a few other reef fish and the odd small cobia.

I’d love to see wahoo and yellowfin tuna turn up this month. I haven’t heard any reports of spotted mackerel yet, which is a bit of a concern but they could appear with a rush. Let’s hope so. As I write, it’s only early days yet but it’s nice to have a few pelagics around.

At the moment, the lower Brunswick River is packed full of white pilchards. This has encouraged a few tailor but the best thing is great trevally are around and good size flathead are gutsing on the pillies. Further up the river, quality grunter bream and mangrove jack are being caught and whiting are spread throughout the river.

Mud crabs have copped a hiding over the holiday period but are still being caught in reasonable numbers and quality. With a bit of decent weather this month, I reckon a few fish will be caught. All the best.