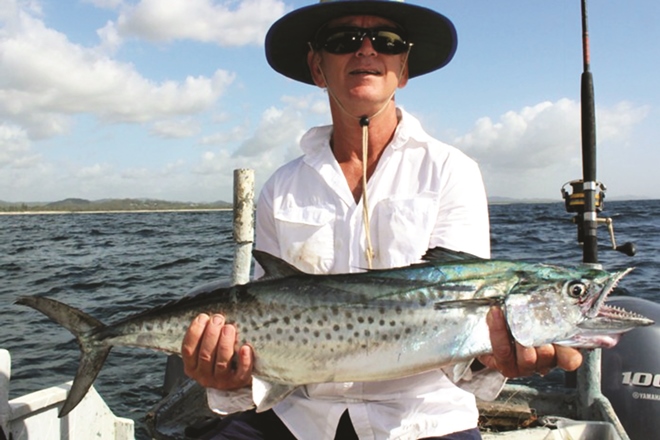 Spotted mackerel are fun to catch, but for the best eating, get them cold quick smart.

IT’S nice to see the return of spotted mackerel to Brunswick Heads after they’ve been absent for a few years.

These crazy little fish are as frustrating as ever but when they decide to bite, they can really turn it on. A lot of people I know around Brunswick Heads don’t like spotted mackerel as much as the larger spanish mackerel. People mention a couple of reasons for this. Apparently, they don’t fight as well! Well they aren’t going to on the heavier spanish mackerel gear, are they!?

Fish for them with 12lb line to see what they can do and you’ll be surprised. They are faster than spanish and their take-off speed is electric. On light line they will come to the boat several times and take off when they see the gaff. Pound for pound, they fight equal to or better than spanish on appropriate tackle. You’ll get more bites on light line too.

The other reason people don’t like them as much is the flesh isn’t as firm as spanish. This is true and they need to be iced in a slurry as soon as captured. I must admit I prefer spanish on the plate but there’s nothing wrong with a bit of well looked after spotty either.

I’ve shared a few fun trips with mates recently. Pat Carroll came for a run and caught spotted mackerel and a couple of spanish. I mentioned I was going to get the camera out and then promptly forgot, so no pics of Pat this month.

Hugh came down for another month in the caravan park and I’ve got no pics of him either. Unfortunately, the first trip we went on saw sharks eat everything we hooked.

On the next trip, Hugh’s son-in-law Roger came too and Hugh kindly let Roger pull the big fish in. We lost a few mackerel in various ways through no fault of the angler. I think the order of spanish mackerel losses was: sharked, pulled hooks and broken wire trace.

Roger then hooked a fish on a live bait that took a heap of line and then stopped, before turning and taking a heap more line in a northerly direction at a slow and steady pace. A spotty rod then went off and I told Roger to pull the spotty in because I thought his fish had been sharked.

I said to Roger and Hugh that instead of breaking the shark off I would leave it on the line and hopefully prevent it from eating the spotted mackerel Roger was now fighting. Getting the spotted mackerel in the boat took a few minutes and the photos a few more minutes, as did resetting the baits. I decided the shark was now well and truly unimpressed and it was time to break it off.

It had arced around from the north and was headed south for Julian Rocks. As I wound the line, whatever was on the end started coming in and I said to Roger it might not be a shark after all, so he’d better pull it in and finish what he had started. It took a while and my speculations as to what was on the end went through a few different species (not including the extinct cobia) before the circling pattern under the boat made me settle on longtail tuna.

When I finally got a glimpse of colour it was a brassy yellow and I had to change my mind again to giant trevally. With some patient rod work, Roger finally had the big GT in his lap for another photo session. An interesting effort when you consider he put the rod in the holder and landed a spotted mackerel in the middle of the fight.

Another capture of note was when my mate Mick came for a run. The first bait to go off was on the spotty gear and after a minute or so it became apparent Mick was not fighting a spotty but most likely a good spanish. The threat of sharks is an ever-present worry but all you can do with light gear is keep the pressure on.

Mick did a great job and landed a solid spanish. We got more spanish and spotties in fantastic conditions, so all in all it was a great day.

The weather went a bit sideways through Hugh’s stay, with buckets of rain. This pushes the whiting down the Brunswick River and we went out to make the most of it. We captured some good fish but it wasn’t too much fun hiding under our raincoats and there wasn’t even a break for me to get the camera out.

The next day there was a slight window in the rain and wanting some good whiting photos we headed out again. Unfortunately, the gap in the rain was just long enough to get the boat ready and once again we sat in a water-logged tinnie not game to get the camera out. At least it wasn’t cold and we still caught a few fish.

Hopefully the spotted mackerel hang around Brunswick Heads for a couple more months yet. April can be a funny month for mackerel around here. Some years they fire but others they go a bit quiet.

NSW DPI Fisheries are after your mackerel frames – click here for more information!

April and May are the best months for wahoo. I haven’t heard of too many yet, which isn’t a great sign, but they could turn up any time. Jewfish should be around, though most boats will still be focusing on mackerel.

We usually get a hit of tailor in early April too, however sometimes they only want garfish. A good supply of garfish is in most bait shops at the moment, which is always a good thing, so it might pay to stock up. Garfish have been in short supply over the past few years but are easier to come by than toilet paper at the moment.

Then again, most things are.