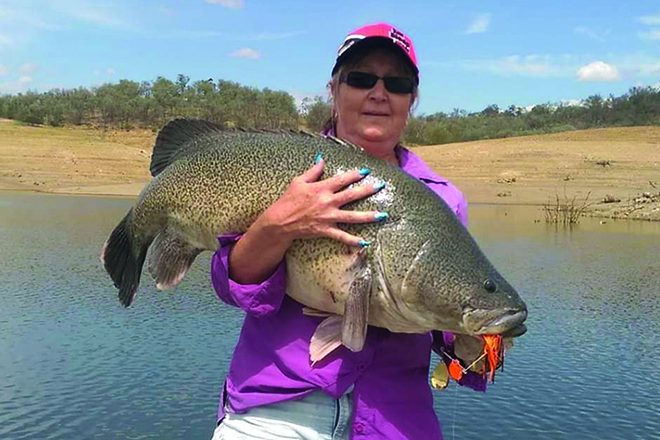 Tanya Reibelt with a 102cm cod hooked on a McCod Spinnerbait produced by her husband.

LIKE most regions, we have had some rain, though not enough at the time of writing.

However, a flow of water down the Mole River and into the Dumaresq River will contribute to making things green again around Glenlyon. For those who don’t quite know their geography, the Dumaresq is a stretch of water between the NSW and Queensland borders.

This is the first fresh into the Mole for 27 months.green again

During that time there was no water in the riverbed to speak of, hence no fishing to be had.

With Glenlyon Dam sitting at 3.5 percent capacity and no outflows, the Dumaresq has not had any real flow in it since the last release of water to Goondiwindi in 2019. The following is what you are going to get if you fish this area.

In the Mole River are no cod, yellowbelly, silver perch or catfish. Your four main species are not in the dry riverbed.green again

The above applies to the Dumaresq River as well. The drought has taken its toll on all species of fish. You may be lucky and get some fish at Goondiwindi and Boggabilla weirs because some water remains in those two areas, though this water is for the townspeople to drink.

What takes place if it rains and the rivers run? This will herald the beginning of the end of the drought.green again

If it’s good rain over 300mm, the hills will have some small creeks flowing down into the catchments. This in turn runs into streams, then rivers, then dams and weirs. No not clear water like in your drink bottle, it will be brown or maybe even black from the fire ash but it may be enough to turn things green again.

What takes place next is nature’s reaction to that flow and is thanks to whatever is left in those small holes of water along the rivers.green again

Some of these species are endangered and we can only hope they’ve survived the drought to the rain event. The above species are the food source for larger species, as are shrimp and crayfish.green again

Please note: it will take at least four years for the food fish to get back to ample levels for the following fish to survive on. Murray cod will start to breed in July 2020, while golden and silver perch, bony bream and spangled perch will breed if the water temperature remains over 23C while the rivers run.

This also applies on storages if rivers and creeks are running upstream of them. Yeah, yeah you say, when can you hit the river to catch big fish like cod and yellowbelly? Well the water is dirty at this stage and will be until everything settles.

Keep in mind that the cod left from the drought are the only fish that will breed over the next four years, along with the yellowbelly, silver perch and catfish. Silver bullet time!green again

We’ll stock them then, right? OK, so who’s got fish to sell to stock the rivers? Oh, no one.

Then breeding season arrives in August-September 2020 and the hatcheries will have fish fingerlings to sell and release in late-November. Up north in the Murray-Darling System, cod and catfish will be breeding from July.

Those people who fish the rivers from July to November and through the Murray cod closed season will of course be targeting yellowbelly with big spinnerbaits. green again

“Oh look, it was unintentional but I caught a big cod on my spinnerbait intended for a yellowbelly – what good bad luck!” Stocking fish is a quick fix, and yes let’s stock golden and silver perch but no cod – I repeat, no cod.

Over 13 years of research we have seen good recurring results of small cod caught in night traps set by biologists who have worked tirelessly on this project. We played god on our local rivers and streams by whacking cod into them and giving no thought to overstocking our systems.green again

The detrimental results of little to no yellowbelly and silver perch being stocked in our rivers is going to change because we can start afresh stocking and monitoring the results of good management. Meanwhile, ‘wow’, our water storages are going to fill up, things will turn green again and this is when you see yellowbelly hitting lures cast off the bank.

Coolmunda, Leslie, Pindari, Glenlyon, Storm King, Connelly and Copeton dams will all fire with the good in-flows being received.

The clear dam water will get pushed down to the walls, while bait fishing in the top areas of the dams will be on fire, with grins galore on the faces of kids as fishing improves for the first time in two years.green again