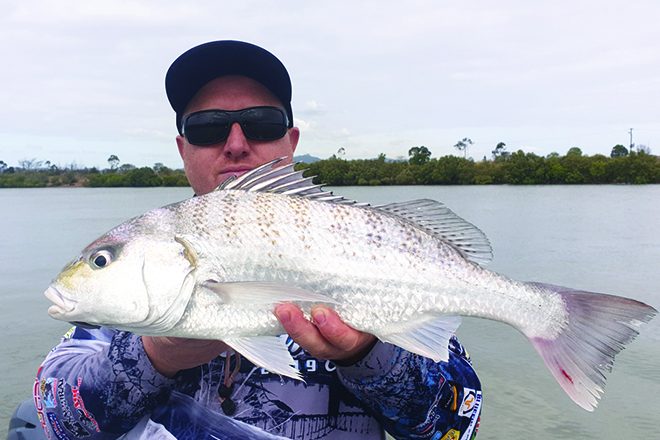 Phil caught this grunter on a 65mm vibe over a gravel patch.

February definitely brought the heat and, finally, rain to most parts of Queensland, setting things up nicely for autumn fishing Gladstone style.

Closer to the coast, rainfall has ensured the rivers and creeks get a much-needed flush of fresh water. Though I feel for the struggling farmers who missed out on relief from drought conditions and my condolences to the victims of the unforgiving fires.

Crabs have responded and started moving through river systems, finding their way into well-set pots in larger numbers. It might be too late for decent barramundi recruitment, though the flush will allow for fingerlings to move into fresh water and the return of larger fish into the salt.

The barra season opened with a bang, with plenty of fish available and fish to 120cm caught. When the first of the run-off came down, the barra were feeding where the fresh met the salt.autumn fishing Gladstone

As the fresh water continues down the rivers, try looking for them in deeper holes. Most fish will head downstream, resulting in locations such as Port Alma and Gladstone Harbour holding better numbers. The rivers around Gladstone with a smaller catchment area will recover quicker than the Fitzroy River near Rockhampton, with its massive catchment starting out past Emerald.

Depending on rainfall received in these areas, the Fitzroy can continue to run for a month or more. It can take good tides and up to four weeks after the run-off stops before the town section is fishable again. The rivers will bounce back stronger because 18-24 months have passed since we received any decent rain.

Before the downpour, the harbour and rivers around Gladstone were alive with bait, which had fish on the bite.autumn fishing Gladstone

Mangrove jack were being caught in numbers not seen before, with catches of two to five fish per trip quite common. The typical techniques have worked, though for consistent results, fresh-cut bait has worked best. I am an avid lure fisher, however I will use what works and have resorted to soaking pilchards on occasion with great results.

Grunter or javelin fish have been thick, with fish to 70cm a common catch. At this size they fight hard and pull plenty of line, with distinctive head shakes. One of these fish will take a little time to net.autumn fishing Gladstone

You may need to drop leader size if they are feeding in shallow water or are hesitant to bite. Both lures and fresh bait work well and they are being caught in many different locations. I would recommend looking at gravel patches and small rock sections to start.

Fingermark have proved a bit slower, but they will become more active in autumn when the temperature drops. The odd decent fish is still coming from deeper rocky areas in rivers and the harbour on vibration lures and live herring.

When they are this active, almost any technique will get them biting. A faster retrieve with a plastic vibe or metal slug won’t be passed up. Gladstone Harbour will be the pick during early March, or at least until the rivers clear. While blue salmon don’t do dirty fresh water, threadfin salmon are the opposite and don’t mind a little sediment.

The middle to lower sections of the Fitzroy River into Port Alma will fish well for them. A small prawn imitation or minnow-style lure may work but if proving fussy, live prawns should get results. Flathead can be found sitting on the edges of the sandbanks and near isolated shallow rock bars.

A shallow-running 70-90mm hard-body or soft plastic will account for plenty, though if not, live mullet will get their attention. Pikey and yellowfin bream are everywhere and can be a pest when chasing other species, though their size has been more than satisfactory. March is a great month to be on the water, especially when the waterways clear from run-off, with both warm and cooler weather species on the bite.