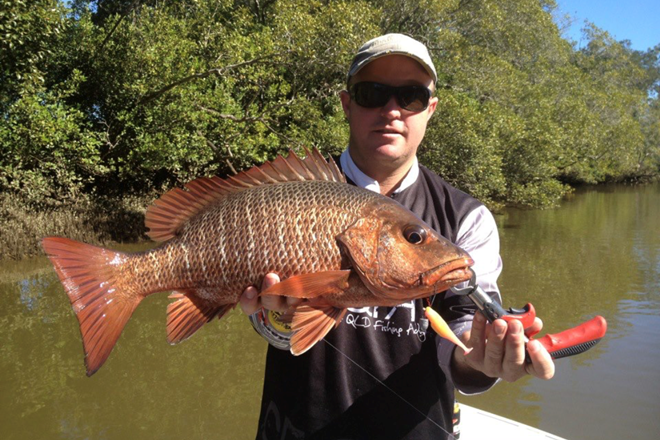 Mangrove jack will be active this month. The author pulled this one off a rock bar a few seasons ago on a Z-Man 3” MinnowZ.

Mangrove jack and more around Brisbane

OCTOBER is a great month in which to target a wide variety of species in southeast Queensland, such as mangrove jack, flathead and jewfish.

Mangrove jack will be at the top of many anglers’ lists. This month is one of my favourites for chasing these brawlers. Flathead will also be a popular target, especially on the Gold and Sunshine coasts. The annual spawning season for flatties will be in full swing during October and plenty of big fish will be spread out on the flats and in the deep water. School size fish will also be in good numbers in the same areas. The Brisbane River should see solid numbers of jew showing up during October. A lot of fish between 70cm and 90cm have been turning up at this time over the past couple of years, so hopefully the trend continues this year.

All the rivers and creeks around Brisbane hold populations of mangrove jack, but the systems on the Gold and Sunshine coasts have larger numbers. I don’t chase jacks on the Gold Coast often, but the region seems to hold the better numbers of big fish. I spend more time on the Sunshine Coast targeting natural structure such as rock bars and fallen timber. The Noosa and Maroochy rivers have loads of this structure and both rivers have healthy jack populations.

The Noosa River is my favourite, especially the stretch between the two lakes. It’s not uncommon to hook 10 fish in a few hours there. How many you land is up to you! On average, the mangrove jack in this stretch aren’t overly large. A 50cm fish is a good one for up there, but plenty of fish in the 40-50cm range will provide a challenge. The by-catch can be really good at times too. Trevally are probably the most common species encountered other than jacks and they can have you thinking you’ve got a big jack with their fast runs.

Estuary cod are also quite common, with some real brutes in that region. Cod are funny fish. I’ve called plenty of cod for jacks over the years. Sometimes they belt a lure and pull like a train, but the next one might suck the lure in and fight like a wet rag. They’re cool fish and love eating lures, so are great for filling in time between bites from the target species. Jewies can also turn up in numbers in the stretch between the lakes.

I’ve had good sessions on jewfish there but the size is always lacking. Legal fish are quite rare but still good fun. One recent session there with a mate produced jacks, trevally, cod, bream, flathead, tarpon and jewies – all in the one spot. A big school of prawns had congregated over a rock bar and every species in the river was gorging on them. It was one of those days where you couldn’t get a lure to the bottom without it being eaten.

The Brissie River should be firing this month. Jewies will be the most common species encountered. Threadfin salmon will also be around in numbers and they like to feed in similar areas to the jewfish. The wharves towards the mouth of the river are the most popular spot for both species to hold up.


It can be a case of feast or famine out there some days. The wharves are mostly carbon copies and don’t have any bottom structure to attract fish to the area. The best way to find fish is to sound around until you see bait schools or predatory fish on the sounder. This can be time consuming but there is no point fishing an area with no life.

Once you find the fish, it’s just a matter of dropping a lure in their faces and hoping they are hungry. These fish can shut down at times and it can be very frustrating when you can see them on the sounder but can’t get a bite. If this happens, try mixing up your lure selection a bit. Scent can also entice the fish to bite. If none of this works, leave the fish for half an hour and come back to them.

That’s it from me this month. I hope to see you on the water.