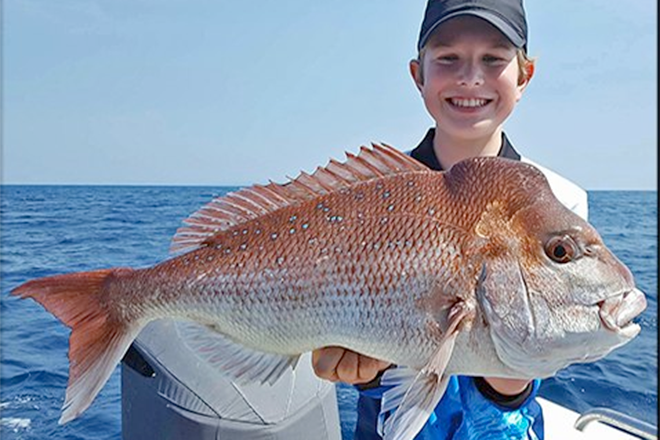 With the warmer weather really starting, plenty of families were out enjoying all that Noosa has to offer. Fishing the Noosa River has seen plenty of whiting and flathead in strong numbers, soft plastic have claimed some outstanding flathead with pinks and reds the most popular colours.  The Entice Bungy baits soft plastics are great starter option all you need are jig heads, pro-cure scent and you’re away. For the bait anglers flathead have been caught on a wide range of baits including pillies, froggies and whitebait. Use these baits with a small gang hook to give you that extra chance of hooking up. Plenty of whiting have been taken on the good old beach worm with yabbies also claiming some nice fish, most of us have a yabby pump so get the kids to work collecting bait.

Strada Viral, Jackson Ebi Panic Prawn and the Jackson Risk Bait surface lures have been dynamite on the Trevally in the lower estuary. Use these lures with a length of quality fluorocarbon leader to help with those annoying bit offs. Plenty of report of mangrove jack have been coming in especially with the stormy weather, it seems that the jack really fire up as the barometric pressure changes on those stormy days. Live bait is still the main stay but there have been fish taken on suspending lures around the pylons and timbers that line the river.

On the beaches; school holidays has seen plenty of anglers heading up the beach in search of tailor, whiting, bream and dart. Good sized Tailor have been caught on gang hooked pillies, mullet strips and Bonito fillet. Whiting, dart and bream have all been caught on live beach worm, prawns and pipis to name a few. Try using a Whiting Prowler rig for smaller baits if fishing in the gutters as these paternoster rigs let you use multiple baits at once.

Using a surf popper above your lower hook can be an effective lures pop along during the retrieve and often catch Tailor when brought back in at speed. For those fishing the rocks and headlands; there have been reports of tuna busting up in close. A few anglers also reported hooking up to unstoppable fish! Be sure to be armed with a reel capable of holding at least 400m of line and quality rod capable of the task. For those of you that are interested in land based game fishing come in and have a chat to the team as this is quite a specialised form of fishing.

Warmer air temperatures have seen the fish feeding off the surface in the impoundments and the Noosa Everglades. Saratoga and Bass have been caught on surface lures during low light periods. Spinner baits thrown into heavy structure as the sun get a bit higher has seen some great success. The new Zman TRD Hogs plastics and Headlocks jigheads and are designed for Bass fishing around heavy structure, and are also seeing some great success.

On the outer reefs, for those with suitable craft snapper, pearl perch, gold band snapper, small red emperor, cod, Jewfish and Cobia all featured on anglers catch lists. Fishing with Instinct paternoster flasher rigs lets you use 3 different baits all at once. These come rigged and ready to use for some serious bottom bashing. Sunshine Reef has again fishing well for those in smaller craft, hitting the water before dawn and making a run for home as soon as the wind picks up. Plenty of quality fish have been hitting the decks including coral trout, snapper sweetlip and mori cod.

Pillie floaters are still getting picked up by bigger pelagic fish and using a quality fluorocarbon leader like YGK Galis keeps your bait looking natural when drifting. Be sure to use a cubed pilchard or pellet and Tuna oil mixed burley when on anchor to bring the fish to you and for that extra attraction try using a Neptune Tinsel head over the top of your pillie. This helps catch the eye of any passing fish.