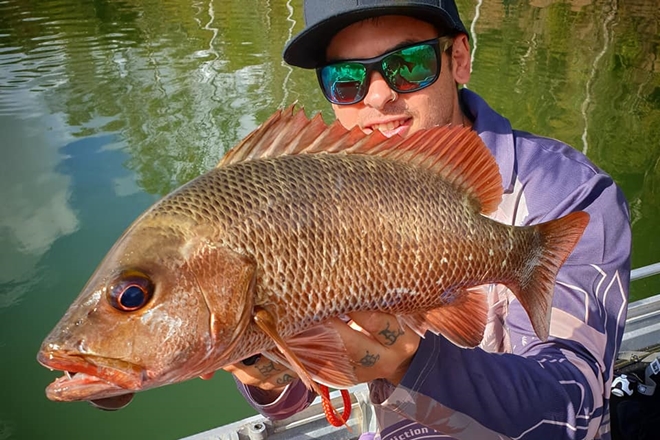 Ricky Wilson with the mangrove jack he caught recently.

Mangrove jack and barra get cracking around Bundaberg

At this stage, the forecast for the Bundaberg area is looking pretty good for the last weekend of the school holidays.  Due to the ordinary weather we experienced earlier this week, we have not received many reports about what has been caught, but fingers crossed that a few larger boats can have a crack this weekend.

The Burnett once again has been cracking over the school holidays, with plenty of anglers wetting a line.  It’s fantastic to see so many small barra being caught throughout this system.  Most of the barra have been responding well to suspending hardbody lures as well as prawn soft plastics with the Zerek Absolute Shrimp getting plenty of runs on the board.  Other species that have been playing the game include big  grunter over 60cm, flathead and mangrove jack.  Also, some really nice bream have made their way back into the Burnett.

Both the Kolan and Baffle systems have fished well over the past week.  Some cracking grunter, flathead, tarpon, queenfish and whiting have all been on the chew.  Mangrove jack are also becoming a common capture in both of the systems with lures and baits working equally well.  Mud crabs have been a little slow but the guys who put in the effort were well-rewarded with some nice bucks.

This magical small impoundment is fishing very well.  It’s fantastic to see so many saratoga being caught now as the water temperature is just starting to rise.  One of the most exciting ways to target saratoga is by using poppers or top water lures.  There is nothing better than watching your lure being smashed from the surface.  Good quality Australian bass are also in big numbers and providing plenty of entertainment for the sportfishing anglers.

Last weekend would have been one of the most productive weekends I’ve heard of.  A lot of barra were caught with the largest being 92cm, which is not far off the magic metre mark.  The bigger numbers seem to be in the backs of the windward bays sitting off points and structure.  Lures in that 80-100mm range have been ideal.  If you’re planning a trip to Lake Monduran I would recommend using 30-50lb leader.  As these fish grow so will the size of the tackle needed to land these awesome sports fish.