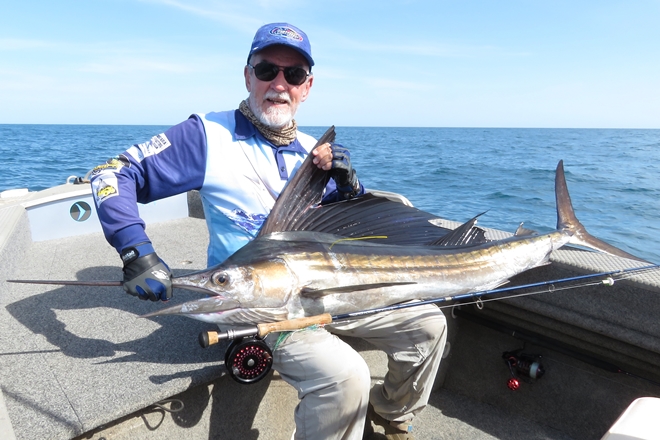 The author was chuffed to land his first billie on a fly rod, a beautiful Gulf sailfish about 35NM south west of Weipa.

I HAVE been saltwater fly fishing a bloody long time!

The legendary Ron Pearson, regarded as the father of saltwater fly in this country, took me under his wing when I visited him in the Kimberley during a round Australia trip in 1973. He helped me to catch my first couple of fish on the long wand, then passed me on to the late Max Garth in Carnarvon for his enthusiastic tuition, which included a technical grounding of epic proportions.

Those never to be forgotten interactions resulted in the late Darryl Steele and I landing the first tuna taken on fly in Queensland, wide of the Caloundra bar in 1974. My story, ‘Flying Blues’, published in The Australian Angler circa 1975, detailed our epic milestone amongst the feeding schools of northern blue (longtail) and mackerel (kawa kawa) tuna that used to be prolific in that area in those days.

Saltwater fly fishing has always been viewed as the most difficult method of trying to catch a fish, a sort of a masochistic indulgence reserved for an altruistic minority with a slight loony streak, but those who participate long-term know there’s much more. Not only is there the satisfaction that comes from the challenge of having a fish eat a presented fly but also a serenity generated from the rhythmic action of casting quickly becomes an intense focus when the subject of the hunt appears. There are few fishing experiences that come with a bigger ‘high’!

Over the years, I’ve found that the effectiveness of using a fly can outfish other fishing methods in certain cases. When queenfish and trevally are feeding at creek or river mouths at the start of a run out tide, a well-presented fly comes into it own. A longtail tuna dragging a fly line, even on an 8-weight outfit, can be brought to the boat by an experienced fly fisher just as quickly as by those wielding a spin rod.

If you’re heading over to Kiritimati chasing bonefish, one of the most exhilarating species on the planet, don’t even bother taking anything but a fly outfit! Every fisho has a species bucket list, whether it’s whiting or marlin. For fly flingers, there’s a second bucket involved and throughout my fishing life, I’ve been working away to tick most of my ‘most wanted’.

Barra over one metre – tick. Threadie likewise, giant tarpon over 50 pound – tick. GT over 40 pound – four lost to bust-offs/sharks, still a work in progress. 30 bones in a day – tick. Permit (snub nosed dart) – still there, and billfish (sails or marlin) – hmm, story there! In 1996 and 1997, I had the pleasure of participating in the first ever World Marlin Fly Fishing Challenge, an event that was the brainchild of a visionary Cairns-based swoffer named Peter Flower.

Peter ran an exceptionally well-organized event and attracted anglers from all over the world. Around the same time, I’d worked the deck on a local game boat catered to marlin fly fishing, acting a second deckie whenever there were interested clients. We landed several marlin successfully, some with anglers who had only fished trout previously. I hooked two marlin on fly during World events, only to lose both when my flies came loose. On the first occasion, the billie hit the tandem fly so hard the two hooks became entangled, inhibiting the entry of the hook points.

My fly headed skywards on the third jump after losing 100 metres of backing. From high to low in 30 seconds – that’s fishing all over, and the reason we keep coming back! Fast forward to Weipa, September 2019!

Thanks to the efforts of a small but very active Weipa Billfish Club, there have been 303 sailfish and seven black marlin already tagged this season – plus 10 recaptures, by far the most ever in the Gulf region. It was time for me to revisit my fly-fishing bucket list and try to tick off another of the few species remaining. I considered the possibility of DIY but at my stage of life, that window of time/ability was quickly disappearing.

With over three decades in the pro guiding game, there’d be few who could better understand my decision to seek the superior experience of a local billfish authority in hopefully maximizing my chances. Ben Bright is one of the top professional guides on the Cape, has extensive billfish experience encompassing several parts of Australia as well as Weipa, and does a wonderful job as recording officer for the local club. He’s a very busy man, but had a couple of days free, so I didn’t hesitate in booking his services.

There were several boats working the grounds when we arrived the Sunday morning. We’d had to punch a bit of a southerly swell which had persisted following a strong sea breeze the previous afternoon. The radio crackled as one boat announced a double hookup on sails. Ben quickly finished rigging a couple of pre-prepared teaser baits and dropped them from the starboard side leaving the port side open for casting. I was still pulling line from my reel when the short teaser was grabbed!

Ben yelled at me to cast as the small sailfish came back for a second try. I was all thumbs as I tried to get the fly in the air as the teaser was yanked out. That three or four second hesitation was all it took for the sail to disappear. One of my ponderings after a lifetime of fishing is the loss of that adrenalin-fuelled anxiety that afflicts most inexperienced punters when a new species or big fish comes along.

Fingers become sausages, practiced actions become fumbles, mental coordination evaporates into a blithering mess. While I’m certainly not going to admit I had succumbed to such a state, I did manage to smile at the thought it may have been the case. Several sails had been seen free jumping close by and a number of boats were hooked up when a bill appeared behind our long teaser. It was a marlin this time!

Ben quickly retrieved the short bait then started leading the little black into the cast zone. It banged the bait repeatedly then evaporated as soon as the fly was in the air. Another disappointment! Several more sails came along after that, all but one pealing off into the depths before it was lured into the strike area. My one decent shot was marred by a lack of coordination on my part in hesitating for a second or so after Ben had yelled at me to cast.

I had not anticipated his speed of retrieval of the teaser bait. The fly landed only a metre or so from the fish but it was already turning away as it happened. Even a big bloop on the fly couldn’t persuade it to come back for another look. Ben was getting frustrated with the behaviour of the fish. They were certainly not as aggressive as they had been during the past weeks. Although I was getting the routine sorted, it seemed that it would come down to split second timing if I was to be successful.

That hadn’t been as necessary on most of Ben’s previous charters. The area quietened considerably afterwards, with the nearby boats reporting only an occasional half-hearted looker. A few fish were being marked down deep but were not coming up to the baits as they had done previously. Ben decided to head for another hot spot that had produced a couple of fish the day before.

We found another vessel in that direction that had come across plenty of fish earlier in the day. We were trolling in the general direction of said boat when Ben spotted frigate birds low down over a patch of ruffled ocean to our port. The teasers were quickly retrieved and ‘last cast’ pointed at 25 knots towards the circling frigates. As we came close, we could see dolphins and sailfish working baitfish just shorewards of the birds.

Ben set the Yammy to trolling speed and broke out the teasers while I quickly readied my rod. It was almost a repeat of our first rise of the day. Ben was reaching back to release the long teaser while letting out the short one when it was pulled from his hands. He yelled, I jumped and a bill waved just behind the boat.

Somehow, I put the fly in the right place, blooping it just after it landed and the sail simply turned and snavelled it! Line zipped off the big Sage reel as the sailfish took to the air, first 30 metres out, then 50 then 80! Ben cleared all the lines and set about chasing the fish while I concentrated on getting some line back. We’d finally found a fish that really wanted to eat! Thirty minutes in, the fight was looking most uncharacteristic.

The sail had come to the surface and jumped a couple more times but was generally hanging deep resisting strongly. Ben and I speculated on whether it had been foul hooked or maybe just one of those billfish that were supercharged. It took close to an hour to get a look at the fish. By then, my wrist and back were aching and there were chafe marks on my lower ab from the reel butt.

Our big worry concerned the fight, as the longer it went on, the greater the chance of a tackle failure. Finally, after 75 mins, Ben grabbed its bill and my milestone was secured. The fly had been grabbed in the middle, the back hook embedding itself in the outside of the jaw. It wasn’t foul hooked, just a fish that wouldn’t give up. We took a quick batch of photos before reviving the fish for release.

I had been resigned to the fact that a billfish wasn’t going to happen that day but, as is typical in game fishing, the boredom turned to adrenalin-filled madness in seconds. Huge thanks must go to Ben ‘Notso’ Bright! I’d certainly chosen the right bloke for the job.

If you are ever looking for a charter in Weipa, regardless of whether your focus is river or offshore, barra or billfish, lure or fly fishing, he’s highly experienced in all regimens but you need to book well in advance to assure his services. Ben can be contacted on 0407 112 685.

For the technical minded: