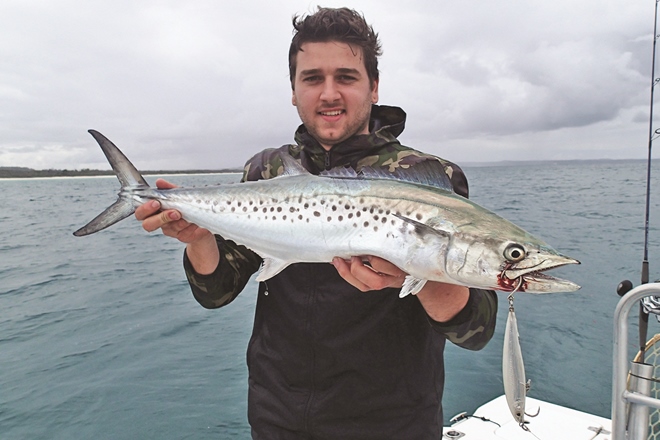 Brandon hooked a spotted mackerel on a stickbait.

WHAT a cracking summer and mackerel season!

The spotted mackerel have just not let up. I was having a chat with one of the local commercial line fishers and we both agreed this has been the best mackerel season in years. Without spotties, summer can be a long, drawn-out affair. It is a great luxury to know that somewhere in Hervey Bay you are going to find a school of fish busting on the surface most days. As a guide, it gives you some breathing room because you can go and fish some lower-percentage stuff with a bit more abandon.

Another great thing about the constant surface feeding through mackerel season is it attracts other predators. We have caught many species over the years around schools of spotties and mack tuna. At times, if you look closely enough you will see the trevally, big tuna, marlin, cobia and others. However, often you don’t notice until the rod buckles more than it would on the average school size fish. Longtail tuna around and in schools of smaller species have been the main feature at the time of writing, but every now and then we see schools of purely big longies busting up.

It’s quite the sight to see, especially if it’s a school of high-flying fish. Full air is the term that comes to mind. Every now and then it’ll be queenies hanging around the surface action during mackerel season but usually it’s trevally of many types, with cobia sometimes there too. One recent day we sat among the bust-ups while we ate lunch. I noticed ridiculous soundings under the boat and initially dismissed them as big tuna, but after lunch was finished they still hung under the boat, very close under the boat. As I peered over the gunwale I could see it was a mix of trevally, small cobia and a few very big sharks. It goes to show it pays to know your sounder.


You can sometimes track these fish around the surface schools with side-imaging sounders. You then require good boat positioning and lure presentation to turn interest into a strike. If you are lucky, they will stay in the area and allow you multiple shots and hence more fish boated. Some of these bigger fish loitering around are difficult to land though, so use heavier gear if you can because the sharks will find you.

We recently had a big cobia on for an hour after it was hooked unexpectedly on lighter tackle. Sharks harassed the fish relentlessly but didn’t attack. Then eventually the rod bent further, buckled and unbuckled, and we knew it was over. Somewhere down there, the sharks were tearing the cobia to shreds. We were thinking we might get a bit back because we could wind in some line before the sharks would grab the fish again, until eventually one of them took the bit with the lure in it. Heartbreaking.

And that is the fate of a few of our big hook-ups. A memorable one was a father and son team well beyond their level of experience with two longies. We were about to boat one when a big bull shark came in slowly and claimed the prize. It then turned around and took the other. Both fish were spent and if we’d had more experienced anglers or heavier gear we may have succeeded. We were not to know that lurking beneath the little guys would be serious fish.

A week or two later the same thing happened but somehow we landed the fish. I was amazed we had no sharks hanging around the seething mass of spotties. On another trip we hooked up on a small group of big longtails feeding gently. The fish were fighting without much fuss and stress, then as we got colour a big black shape emerged from the depths and claimed the big tuna right under our noses. It was hooked on heavy tackle and beaten relatively fast but still taxed.

I guess that’s life these days, with sharks menacing anglers everywhere. People often ask how I boat fish under these constraints. Mostly it’s because I use heavy gear when required. I make sure I know what the gear is capable of and use it to its maximum. If a place is ‘sharky’ I avoid it and try not to hook fish in that area on purpose.

Targeting small numbers of fish often works too because they attract fewer sharks. Working harder to hook that one fish on the sounder may be more productive than hooking a dozen and getting eaten every time. At times the sharks are so thick it seems they are everywhere.

Visit Tri's Fraser Guided Fishing Facebook page @ https://www.facebook.com/FraserGuidedFishingWithCaptainSquinty?fref=ts or give him a call on 0427 230 261 to book a charter.
Previous Nine fishers saved after six days adrift at sea
Next Fly fishing casts a new light on mental health