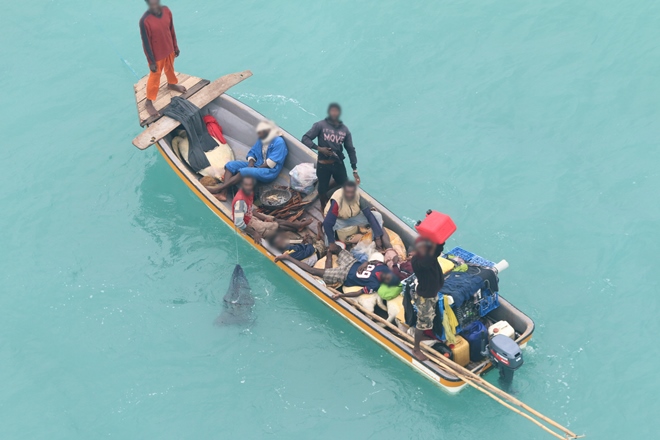 Nine PNG fisherman have been given food, water and fuel by ADV Cape Fourcroy after drifting in the Torres Strait for six days. Photo: ABF

NINE Papua New Guinean fishers are lucky to be alive after being found in the Torres Strait, having spent six days adrift without fuel or food.

On Friday, February 2, a Maritime Border Command helicopter spotted the 7m banana boat adrift on Warrior Reef. Australian Defence Vessel Cape Fourcroy was tasked to respond and located the vessel at approximately 12.30pm on February 2. Despite their ordeal, the men were uninjured.

The Cape Fourcroy crew resupplied the vessel with food, water and fuel and they were able to proceed back to PNG under their own steam.

Commander MBC, Rear Admiral Peter Laver, praised the work of the Cape Fourcroy crew on board.

“While our focus in the Torres Strait is protecting Australia’s waters from maritime security threats, the presence of the dedicated crews on our MBC vessels means we are never far away when emergencies like these occur,” Rear Admiral Laver said. “The waters of the Torres Strait can be treacherous and these men are very lucky that MBC located and intercepted them when we did.”

MBC is a multi-agency taskforce within the Australian Border Force that maintains a constant presence in the waters off northern Australia, including the Torres Strait. MBC utilises a range of aerial and maritime surveillance and response assets from the ABF and ADF.