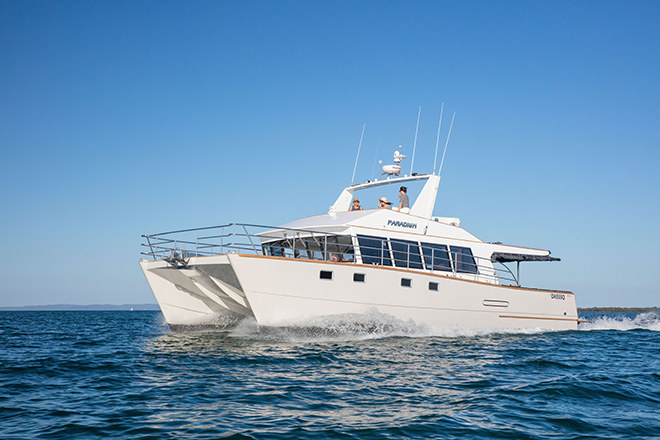 Melbourne to Brisbane without refuelling with Yanmar 6LPA

Like all of the power catamarans Peter Brady has built over the last 10 years, she is powered with dual Yanmar 6LPA-STP engines delivering a total of 630 hp. With Peter Brady’s design emphasis on long-range cruising, the preference is for simple uncomplicated fuel injection and engine control systems for power plants wherever possible.

These engines have a greater tolerance to the “not so perfect” fuel and more basic maintenance facilities often found in remote destinations. “The high performance Yanmar 6LPA- STP2 – 315mhp engines have a mechanical fuel injection system that suits both mine and my clients design philosophy perfectly.

When I design and build trans-ocean capable vessels, ‘strong, simple and reliable’ are the key requirements of both the boat itself and the mechanical components specified,” Peter Brady said.

The Yanmar 6LPA-STP2 is a sophisticated, true hiperformance and well proven package. It is direct injected with mechanical governor and is turbocharged and intercooled. 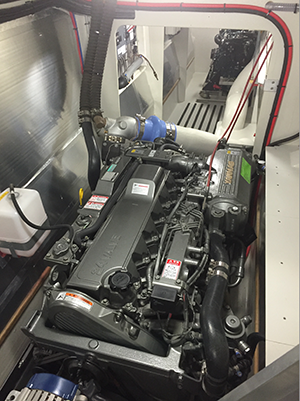 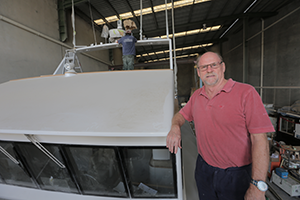 This straight 6 cylinder engine pumps out 315mhp at 3800 rpm at the flywheel. The 4-valve per cylinder engine boasts a 4.2 litre displacement for sustained torque through the mid rev range while still offering an impressive power-to-weight advantage coming in with a dry weight of only 408kgs without the transmission.

Matched to the 2.43:1 reduction Yanmar transmissions, these Yanmar engines have the torque to swing big props, slowly. This high reduction ratio with big props is part of Peter’s formula in consistently delivering ultra-high fuel efficiency. On sea trials with a full load “Paradigm” achieved a top speed of 23.2 knots with an economical cruise speed of 15 knots using 24-25 litres per hour per engine. A total compliment of 3,300 litres of fuel on board gives the West Coaster 49 a cruise range of 870 Nm at 15 knots or approximately 1,160 Nm at 8 knots with a 10% fuel residual for safety.

Inspired by the cray boat design from Western Australia, “Paradigm” has forward raking windows for reduced glare and heat. Since her intended long term cruising grounds are the Kimberley, the upper deck is set up as a comfortable viewing platform because the scenery is up amongst the cliffs as much as it is on the water. Also featured on “Paradigm” and with all of Peter’s recent designs, is a huge covered back deck. This is where the owners spend most of their time relaxing at anchor or on long passages.

The interior is laid out for long range, self-sufficient cruising, yet has all the modern facilities of a beachfront apartment with a practical yet luxurious finish. There is sleeping for six adults, however the boat will be mostly occupied by the owners as a cruising couple.

“Paradigm” has been custom built for her owners who live in WA, and as their business is in low voltage electrics, the vessel has a plethora of top end and cutting edge low voltage electrical equipment on board. Initially, the owners plan to take “Paradigm” north, using Magnetic Island as her base while cruising the Barrier Reef.

Longer trips around the top end and through the Kimberley to her home in Western Australia, are planned for the future. At the heart of Peter Brady’s success is his ability to design a hull form which excels in both high cruising speeds, economy and comfort, setting the standard in the fast trans-ocean powerboat cruising market. The concept of travelling the Pacific or the most remote regions of the Australian coastline at anything but displacement speed, has been outdated by his
solution to long distance powerboating.

This displaning hull form has narrower sponsons, a higher tunnel clearance and a wider tunnel width than most planing cats which improve its rough weather performance in combination with Peter’s unique Controlled Vapour Dampening (CVD) design features. Peter’s displaning hull designs are just as efficient when running at lower speeds as they are at higher speeds, cutting through the water rather than trying to plane over it. This seamless transition between displacement and planing speeds allows the skipper to choose the safest speed for the prevailing conditions.

“The pathway to achieve efficiency is quite simple… a slippery displaning power cat hull, constructed from composite materials and powered by fuel efficient Yanmar engines.” While “Paradigm” prepares to head away cruising, building is already underway at Pacific Power Cats of the next in the Pathfinder “M” range. She is an Offshore 45 for charter operations and long range coastal cruising from the owner’s home on Phillip Island in Victoria, up Australia’s eastern coast and
Yanmar 4LHA-STP – 240mhp engines.

The variety of displaning power cat sizes and styles in the Pathfinder “M” range perfectly demonstrates the ability of Peter Brady’s variable dimension hull moulding system. When applied in combination with the latest developments of his P.A.C.K. (Prefabricated Assembly Component Kit) boatbuilding system to utilise the platform engineering concept, the economic gap between production and custom boatbuilding is bridged.

“To compete with European and Asian imports we not only have to be better built, better designed and more fuel efficient, but we have also had to develop new boat building techniques that keep us competitive on price,” Peter stated. “We have proven that with the right combination of hull design and engines, we could save Australia importing millions of litres of diesel fuel a year if only a small percentage of the cray fishing fleet changed over to displaning power cats.”
“This figure could be much higher again if other commercial operators followed suit.”