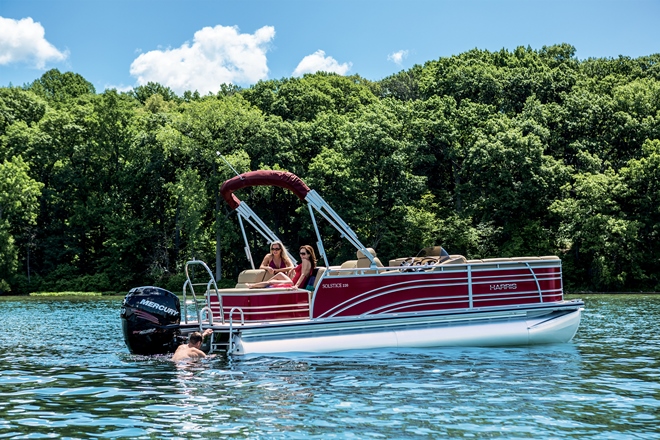 THE pontoon boat market is one of the fastest growing boat segments in the world, and Australian boat lovers are quickly discovering why.

Owner of Eade’s Xtreme Marine Paul Eade said: “We’re seeing it in our sales and there’s been a real increase in the interest pontoon boats are getting at shows.” Paul, based in Echuca, Victoria, is the national distributer for Harris Pontoon Boats, and has been involved in pontoons for about eight years. “The thing about pontoons is they are incredibly versatile and manoeuvrable,” Paul said. “With them being new to the market, once you get people experiencing the ride out on the water they’re quickly converted. “Even hard-core traditional boaties are blown away, especially when they realise they’re good for salt and fresh water.”

Every boat design is a compromise between speed, capacity, comfort, range and a host of other factors. Pontoon boats have been described as “the least compromised”. “I find that really accurate, because with a pontoon you can fish, you can ski behind it, you can take two or three families aboard and you can get through really tight and twisty areas,” Paul said. “They are trailerable and have a very efficient hull, which can pop you up on the plane at about 2500rpm.”

Paul is one of the people leading Australia’s pontoon push, offering great boats and full support – including a manufacturer’s warranty – which has been lacking in the market. And while he’s selling more boats, he’s also selling more Mercury engines. “They make a good match,” Paul said. “I recommended Verados for my last two pontoons, a 225hp and a 300hp, which provide all the power you’d need for skiing but are ultra-smooth and quiet, which is ideal when you’ve got friends and family aboard for a cruise. “I found that people also love the Digital Throttle and Shift technology because it makes driving the boat so much easier.”

Paul has found Mercury’s enormous range to be a great benefit because there’s always an engine to suit, and no matter which engine you pick you know you will get performance and reliability. “Pontoons are being bought by everyone from retirees to young families who just want to get on the water and have a good time,” Paul said. “That’s what they get with these boats and that’s what they get with a Mercury engine.”

For more information, visit www.xtrememarine.net.au and check out the video below.