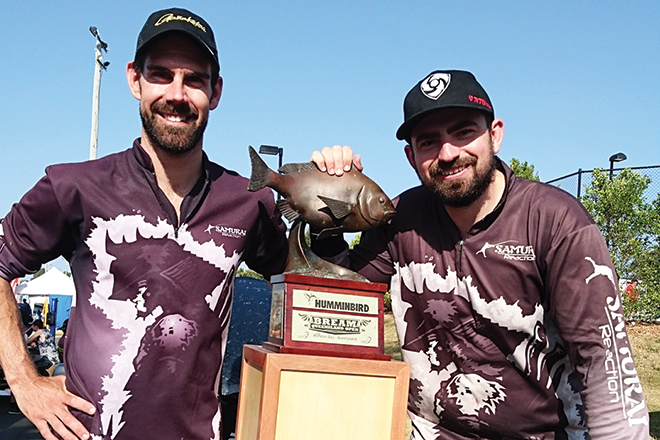 Tristan Taylor and Dave McKenzie from Team Samurai Reaction were the winners of the 2017 Mercury Queensland Bream Open.

THE Mercury Queensland Bream Open once again proved to be one of the most challenging tournaments on the ABT calendar.

As in past years, the arena for the tournament was Moreton Bay, with the back-up of the Gold Coast in the event of strong wind. The weather certainly tested competitors, with conditions ranging from glass-outs to strong wind warnings.

With the forecast for the weekend less than favourable, Team Bush ‘n Beach/Atomic (comprising Anthony Wishey and I) decided to pre-fish the Brisbane River and Moreton Bay. We caught fish in both areas and just had to wait to see what the final forecast would be and where we would be allowed to fish.

On day one of the Queensland Bream Open the forecast was marginal, but with 15-20 knots of northerly we were allowed to fish the bay and as usual Wishey announced: “The bay is open!” First thing in the morning, a five to 10-knot breeze was perfect for our planned topwater approach in the southern bay.

We were using Bassday Sugapen surface lures in colour 137 and soon had our bag of five small fish. While we fished the southern bay islands, the remainder of the field spread to all areas of the bay, from Redcliffe to Jacobs Well.

As the tide rose, we changed our approach to cranking hard-bodies around structure. The Atomic Hardz Bream Crank 38mm Deep was our lure of choice in colours Ghost Gill Brown, Muddy Prawn and Ghost Brown Shad.

Throughout the day we slowly upgraded our bag and were happy to weigh in 3.82kg, putting us in second place.

Team Samurai Reaction’s Tristan Taylor and Dave McKenzie were the leaders with a 3.85kg bag and they had employed a similar game plan to us, fishing topwater and cranking the shallows. Team Pontoon21 was in third place with a bag of 3.77kg.

With less than 100g separating the first three teams, this was going to be an epic three days of fishing.

On day two, the forecast of calm wind early turning to a strong wind warning of a 25-knot northerly forced ABT to confine all boats to the Brisbane River, which had all teams rethinking their game plans. Since we’d pre-fished the river before the Queensland Bream Open, we had a plan to target Luggage Point first and see where the day took us. With Team Samurai Reaction leading us out at the start and also deciding to fish Luggage Point we were no match to beat them to the spot – their 250hp Mercury had them in the box seat and we were forced to change plan on the run, deciding to fish the pipeline pylons on the northern side of the river.

It was a grind but we landed three small fish using soft plastics and crab patterns. We headed to Luggage Point after a couple of hours and spoke to Tristan and Dave to be given the bad news that they’d had an epic session on big bream, with a bag they estimated to be bigger than their day one total of 3.85kg.They left us the spot because they said it was too hard to fish now the tide had risen. We caught a few bream and by-catch to round out our bag but there were no kicker fish for us. The rest of the field had spread from the rock walls at the mouth up to the Gateway Bridge.

All employed different methods ranging from shallow cranking rock walls and boat hulls to fishing deep with crab lures and soft plastics. The weigh-in back at the showgrounds revealed Team Samurai Reaction’s estimation to be correct, easily out-fishing the remainder of the field.

A 4.07kg bag gave the guys a lead of 940g over second placed Team Pontoon21. We were 1.78kg off the lead with it all in front of us if we were to be successful on the final day. As day three began, it was clear the weather gods would not be kind.

We woke at 3.30am to a 14-knot northerly blowing in the bay and the forecast of a 20-25 northerly developing. The venue was changed to the Gold Coast, with the northern boundary being the northern tip of Macleay Island. All boats bar one decided to stay local on the Gold Coast for the final day of the Queensland Bream Open.

Team Atomic’s Aaron Sharp and Steve Eldred decided to fish their beloved bay even in the testing wind and as it turned out they weighed the biggest bag for the day at 2.46kg. We struggled. We saw plenty of fish but catching them was another story.

Eventually our bag was filled with small fish after we were unable to locate any kickers. We used a tandem approach, fishing pontoons with plastics and crab patterns and throwing Bassday Sugapens and Atomic Hardz Bream Crank 38mm Double Deeps between the pontoons to the sandy beaches.

All teams we saw in the canals said they were struggling and complained the wind was testing their ability to get lures close to where they intended. The bag weights on the final day were evidence of the tough day. In the end, Team Samurai Reaction held on to win with a three-day total of 15 fish weighing 10.3kg.

Well done Tristan and Dave on your Queensland Bream Open title. Second place went to the consistent Team Pontoon21 comprising Denis Metsdorf and Khoi Pham, with 15 fish totalling 9.41kg. Team Atomic’s decision to fish the bay on the final day got them into third place, with their 15 fish weighing 8.25kg.

This tournament was a true test of fishing skills due to the three different arenas each requiring a different approach. The conditions also proved testing, whether it was the glass-out calm that makes it very difficult to tempt spooky fish or the 25-knot northerly that makes it tough to just stand on the decks.

I’m sure all anglers who fished the event will agree with me in saying we all enjoyed ourselves and would like to thank ABT for organising and running the event. ABT’s coverage with live video footage and social media updates was fantastic and gives all anglers access to a wealth of knowledge.

Thanks also to sponsor Mercury for being involved and to all the teams’ individual sponsors. The camaraderie and banter between the teams was fantastic, whether having fun or helping each other out by assisting with launching and retrieving.

This is a great competition. Bring on next year!