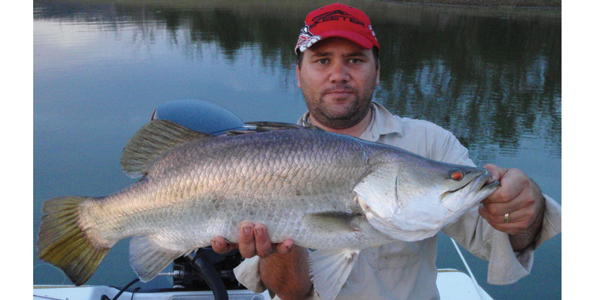 Barra such as this one caught by Stuart Adcock are available during winter at Monduran.

AS most barra anglers know, the colder months can make fishing at Lake Monduran hard but not impossible, and for those anglers who regularly fish Monduran, many love fishing at this time of year. Some solid fish are still being caught, the only difference is instead of that big straw hat and an Esky full of cold drinks it’s a beanie and a thermos of hot tea or coffee.

One of the great things about chasing winter barra is it’s done in gentleman’s hours. There’s no need to be out of bed early because most of the action occurs in the afternoon. Hot spots for winter barra that are overlooked by a lot of anglers are the small bays on the right-hand side as you head upstream just past the first cut through.

With the westerly wind of winter, these small bays have warm water pushed into them that sees the barra move out of deeper water close by and up into these shallow areas. If the wind is blowing too strongly to fish here, check out the bay on the eastern side of the lake at the beginning of the first cut through. Its shape and the way it joins the channel means it is usually protected from the wind, which is a major factor when water temperatures are dropping.

In holding warmer water, this bay seems to attract the baitfish and in turn attracts the barra. Slow retrieves and shallow-diving lures such as Yo-Zuri Crystal Minnows, Storm Thunder Barras and Reidy’s B52s work best. During the colder months, finding water that is a few degrees warmer is all it takes to get into the fish, so small points in shallow bays with warmer water currents being blown across them are top spots to cast.

Some anglers think that in winter any lure that can be retrieved slowly is the best option, and while these lures are good they are not always the best. A number of the stickbait-type or very shallow-running lures fished using a quick and hard twitching retrieve are more likely to make a barra hit out of reaction than hunger.

The water is a lot clearer in winter and because the barra are usually up in the shallower water or closer to the surface during this time of year you have to take more care not to spook them. This usually means long casts, which may require using a longer rod with lighter braid and leader. I know many anglers won’t agree with this because they are scared of losing fish, but in order to lose a barra you have to get it to strike first, and if that means dropping line class then that is what you have to do.

So my tips for winter are: look for the warmest water; fish the points with the warm currents flowing across them; employ long casts and fish lighter; and fish more sheltered bays if there is strong wind.

Foxies Barra Havoc
About nine years ago, my wife Jacky and I had the bright idea of starting up a little tackle shop in Gin Gin to service the growing freshwater barramundi fishing scene of Lake Monduran and Lake Awoonga. So in April 2007 we fulfilled our dream and Foxies Barra Havoc was opened.

A couple of months after opening we added our website www.barratackle.com.au and now have customers in all states and territories of Australia as well as overseas. On April 30, 2015 Foxies Barra Havoc went to new owners Les and Donna.

Jacky and I have had just over eight wonderful years in the shop and in that time have met some great characters, made excellent friendships and enjoyed helping people catch their first barra. We would like to take this opportunity to thank all our great customers, suppliers and their hard-working reps for making this chapter of our lives so memorable and enjoyable.

I would also like to thank Ben and all the crew at Bush ‘n Beach for their support over the years, as well as you the reader, and I look forward to continuing writing. We would also like to wish the new owners all the best in the future. Thank you again and I hope we can catch up on the water sometime.

If you’re heading to Monduran or Awoonga, call in and have a chat to the new owners Les and Donna and get the up-to-date local knowledge on what’s happening on the barra scene in the fresh or salt.