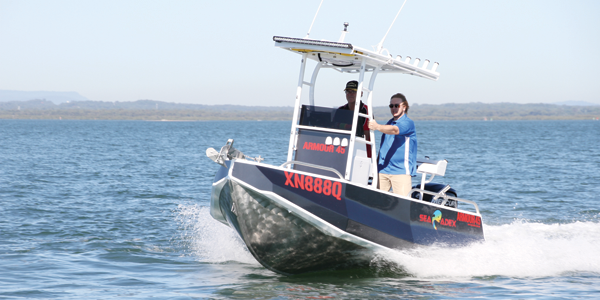 The sharp entry cuts cleanly through the chop with the reverse chine deflecting the water down and away from the hull.

ONE of the key elements to get right when designing and subsequently building a boat is to make sure it delivers on its desired purpose.
Whether it’s a ski boat, bay cruiser or hard-core fishing rig, it needs to meet that final objective.

So what better way to get a serious fishing rig than by having a hard-core fisho build it. This is what the team at Sea Adex has done with its latest Armour range.

The Armour range comprises Sea Adex’s flagship boats, or as described by Adam and Rex (owners of Sea Adex), their true battle ships.
While these boats are not intended to be shipped off to war, they have been built extremely tough to handle the often punishing environment you want to fish in. Currently three different sizes are offered in the Armour range, with boats available in 4.5m 5.5m and 6.5m lengths.

Our test boat was the 4.5m Armour centre console fitted with a 100hp Mercury four-stroke. However, the boats are also available with a side console, cuddy cabin or full hard top design, so you can pick the one that suits you best. Now what makes this 4.5m boat stand out from the crowd?

First, I think it would have to be the finish and attention to detail. Little things such as fully welded gunwales, a large anchor well, ample rod storage, plenty of headroom under the solid targa and a clean layout make this boat easy to use and very functional.

As mentioned, owner Adam is a keen fisho, so he has designed this boat to be fished from, and that is apparent once you are on board.
The beauty of these custom-built boats is you can add or take off any feature you wish. Since this was a demo model and on show, it had been tricked up to allow people to see what can be fitted into it. Rest assured, plenty can be.

With an overall length of 4.7m I would not regard this as a big boat, however as we dashed across a smooth Moreton Bay, the high sides, solid constriction, impressive targa and level foam flotation would give you a sense of security if the weather was to get rough. And I guess this is where the Armour is aimed.

It is easy to handle at the ramp, small enough to fit down the side of a house, fishable solo, two or even three up, packed with creature comforts and will get you back to the ramp safe and sound when conditions turn nasty. Having that peace of mind and knowing you can handle a mix of conditions is reassuring, particularly in smaller boats and especially if you are looking to fish a little farther afield.

In terms of performance, the Sea Adex Armour 45 is rated to a maximum of 100hp, which considering the solid construction is what I’d be putting on it. To give you an idea of how solid, the hull plates, side sheets, girders, bulkheads and deck plates are 4mm 5083 aluminium.
It also has a fully sealed self-draining deck.

The hull design incorporates an impressive 23-degree constant deadrise, ensuring you cut effortlessly through the chop while the reverse chine provides lift and deflects spray. On the test day, conditions were calm and there was only some boat wake to put the boat through, though Rex and Dan found a barge wash to hit at speed and the Armour performed very well, landing and tracking smoothly after getting a bit of air.

Running through a series of turns, the hull stuck very well and ran true to the direction it was pointing. In fact, it was a fairly easy boat to drive and did what I expected it to. As mentioned, this boat was loaded with features including a 60-litre freshwater tank and shower head, which is stored under the centre console.

Large tackle trays have also been built into the side of the console. I actually prefer to use tackle trays these days rather than a tackle box because you can easily bring the specific gear you need. This design makes them easy to get to and keeps them out of the way and off the floor.


In saying that, the Armour 45 has a massive amount of storage, with plenty of room to stow a number of items. The front storage hatch is huge, though I think some little ‘keeper’ walls on the sides to prevent things rolling off may have made the shelf section a bit more user friendly.

However if you want to store big bulky items on board such as a swag or tent, this is the place to do it. Side pockets also run from about the helm back and a large underfloor storage section is at the helm. The rear of the boat has been made into a lounge that provides a comfy place to rest.

It also keeps the batteries out of the way yet within easy reach. Under the middle seat is a massive live well. It’s so deep you will actually need a little scoop net to make it easier to get your livies out. At the rear of the boat is a well-appointed bait board with a compartment that will comfortably hold a block of pillies.

Additional rod holders have also been placed here as well as a couple of cup holders. Even though the bait board is workable where it is, you can relocate it to the side of the boat with ease, which clears up your fishing room at the stern even more. At the helm you have excellent vision and as mentioned, good head clearance with the hard top targa.

As you can see from the photos, plenty of room is available to mount the biggest electronics your heart desires or wallet can afford. The layout of the console also allows you to either flush mount your screens or mount them on top. Rather than having individual seats, more of a cushioned lean seat has been incorporated.

This way you can sit or lean on it from a variety of positions around the back of the boat and it takes up less room.
A couple of Eskies have also been stacked under the seat and one would make a good place to keep your drinks and food, with bait in the other. Though not in the boat when we tested it, an Esky normally sits in front of the console, which doubles as another seat and would be a perfect spot to store your fish.

As I mentioned, this boat is jam packed with features. If you are interested in going for a test run or learning a bit more about the boat, give the guys at Sea Adex a call on 0414 821 448 or visit www.seaadex.com.au

The business is located in Capalaba, so you can even drop by and check out the boat in person. The Sea Adex Armour 45 has a starting price of $38,000 and you can fit it out as you like. Alternatively, the demo boat pictured with its host of features is now up for sale for only $44,000 including everything mentioned and more.